By Qin Ziyi and Li Rongde 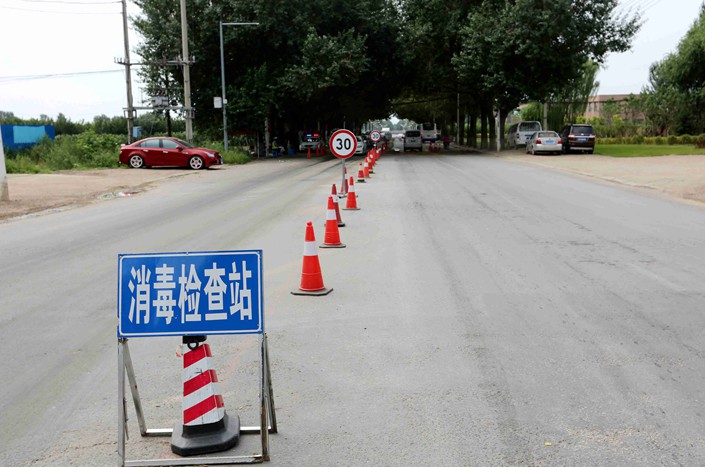 A disinfection checkpoint near Wuwu village in the Liaoning province city of Shenyang on Aug. 6. A total of 47 pigs died from African swine fever in the city earlier this month. Photo: IC

The African swine fever that hit China for the first time earlier this month appears to have continued to spread around the country — the world’s biggest pork market — after dozens of pigs died from the contagious disease in the eastern province of Jiangsu.

Pigs in a farm in Lianyungang fell ill on Wednesday, and 615 hogs have been confirmed as infected with the swine fever in the latest outbreak, the country’s Ministry of Agriculture and Rural Affairs said in a statement on Sunday. The ministry did not identify the farm in Lianyungang's Haizhou district, but did say that 88 hogs at the farm have died from the virus and the outbreak’s cause remains unknown.

Emergency measures, including culling remaining animals and disinfecting operations at affected pig farms in Lianyungang, have brought the new outbreak there under “effective control,” the ministry said.

African swine fever, found in warthogs, bush pigs and ticks, has historically been reported across Europe, Russia and sub-Saharan Africa, but never in East Asia until China reported the first outbreak earlier this month. It does not affect humans.

The Jiangsu case is the third outbreak of the disease within a month. The news has cast a shadow on China’s pig-farming industry, which accounts for more than half of global output and provides the majority of the meat consumed in the country.

An outbreak of the disease at a farm in Shenyang, the provincial capital of Liaoning province, 800 miles north of Lianyungang, killed 47 pigs and sickened another 47 earlier this month. Liaoning has culled more than 8,000 pigs in an attempt to contain the outbreak.

A second outbreak was reported in a slaughterhouse in Zhengzhou, the capital of China’s central province of Henan on Thursday. A unit of WH Group, the world’s top pork producer, which owns the slaughterhouse, said it had culled 1,362 pigs that had been shipped in from Heilongjiang, another province in China’s northeast.

No African swine fever was found in the Heilongjiang city of Jiamusi, which supplied WH Group with the animals, China News Service reported Friday citing the provincial government.

African swine fever is highly contagious and animals could contract it during transportation, according to an official with Heilongjiang Animal Husbandry and Veterinary Bureau who asked not to be named as he was not authorized to speak to the media. His bureau is looking into this possibility and others, he told Caixin.