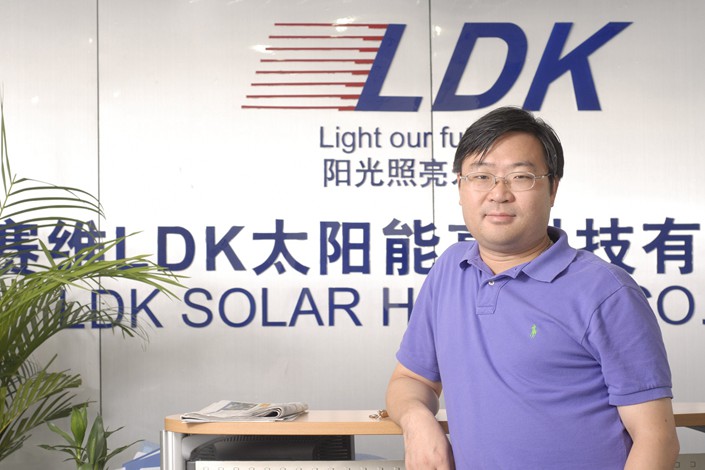 * The 43-year-old Peng stands accused of swindling more than 5,000 investors

* Solarbao has been caught up in the turmoil gripping the P2P industry, with hundreds of lenders running into financial or legal trouble

(Beijing) — Peng Xiaofeng was once China’s youngest billionaire and a rising star in the solar industry. But the founder of now-bankrupt LDK Solar has been put on China’s most-wanted list, hunted by law enforcement agencies for illegal fund-raising by his peer-to-peer (P2P) lending platform Solarbao.com.

Police in the city of Suzhou, where Solarbao.com is registered, want Interpol to issue a Red Notice against 43-year-old Peng, who is accused of swindling more than 5,000 investors and leaving a trail of debt amounting to 220 million yuan ($32.1 million). They have also branded the platform, a subsidiary of Nasdaq-listed SPI Energy Co. Ltd., a fraud.

Peng, who is chairman and chief executive of SPI Energy, is believed to be overseas and police applied to the Ministry of Public Security, China’s top law enforcement agency, on Aug. 8 to ask Interpol to issue the alert to its 192 member countries. Once the notice is put out, local police forces will be requested to locate and arrest Peng so that he can be extradited and returned to the Chinese mainland.

The Shanghai address listed on SPI Energy's website was found to be occupied by another, unrelated, company when Caixin paid a visit on Tuesday. Phone calls to the company's Shanghai, Beijing and Shenzhen branches have been unanswered, and the company has not responded to emails sent to the investor relations address on its website.

Solarbao has been caught up in the turmoil now gripping the P2P industry, with hundreds of lenders running into financial or legal trouble. The company was launched by SPI Energy in January 2015 as an online investment platform to host “innovative investment products allowing investors to benefit from, and contribute to, the growth of solar energy in China,” according to an announcement by the listed company at the time.

Peng Xiaofeng is one of hundreds of businessmen who have ridden the waves of China’s economic development, moving from one hot sector to the next, making millions on the way up only to crash and burn as the waves crested and slammed into the shore, leaving a trail of misery and debt in their wake.

Peng is reported to have made his first pot of gold in 2004 at the tender age of 29 as the owner of an export company selling safety vests. In 2005, spotting the potential of solar power, which was designated as a strategic emerging industry by the government, he set up LDK Solar, a producer of photovoltaic panels, and became a poster child for the country’s booming solar industry.

Peng found the perfect match for his ambitions — Wang Dehe, then mayor of Xinyu, a city in Jiangxi province in China’s southeast. Xinyu was heavily dependent on the steel industry and needed to find new sectors to bolster the city’s growth, Wang later recounted in an interview with China Business Journal (link in Chinese) in 2009. In 2005, Xinyu kicked off a campaign to turn solar power into one of its pillar industries, and made it “Project No.1” for the city.

In July 2005, Xinyu signed off on a 200 million yuan loan agreement with LDK, accounting for one-ninth of its fiscal revenue in 2004, and the company set up its manufacturing base and headquarters in the city.

The local government cultivated the industry and “decided to hold frequent meetings with solar panel companies like LDK,” as they “shared the same goal,” Wang said. Investment in the solar industry was a once in a lifetime bet, and his political career would be over “if the investment went down the drain,” he told the newspaper.

Flush with government subsidies and bank loans, Peng’s LDK expanded rapidly and so did his personal fortune. In July 2007, just two years after the company was founded and a year after production began, it listed on the Nasdaq, the tech-heavy U.S. stock exchange, making Peng a yuan billionaire at the age of 32.

But LDK’s star began to wane as companies rushed into the sector lured by easy loans and government subsidies. Overcapacity and a series of anti-dumping investigations triggered by the U.S. and Europe hurt the domestic industry. LDK’s finances started to deteriorate and by 2009 it was losing money. Wang was removed as mayor and party secretary of Xinyu on Dec. 31, 2009, at the age of 59, a year before retirement age.

By the end of 2011, LDK had debts of 17.3 billion yuan, 227% more than its assets. In 2014, the U.S.-listed unit entered bankruptcy proceedings after defaulting on a bond and was delisted in May 2015. Although the company emerged from bankruptcy in 2015, it was eventually liquidated in 2016. Peng resigned as chairman and a director of LDK in 2014.

LDK’s collapse left the local government and its creditors nursing heavy losses. A court in Jiangxi approved bankruptcy reorganization proceedings for LDK Solar’s four biggest subsidiaries in 2015, which hold most of the group’s 51.6 billion yuan of debt, but creditors are still slugging it out and the reorganization has still not been completed.

Unlike Wang, who paid the price for his support of LDK, Peng managed to escape from the mess and reinvent himself, rising like a phoenix from the ashes of the disaster as head of Solar Power Inc., a company listed on a U.S. market for stocks traded over-the-counter, known as the OTC Bulletin Board.

In January 2011, LDK bought a 70% stake in Solar Power Inc., which designs, manufactures and delivers photovoltaic solar systems to business, government and utility customers, for $33 million. Peng became chairman of the board. After a reorganization and merger with a new Cayman Islands incorporated company, SPI Energy Co. Ltd., the company changed its name to SPI Energy and transferred its listing to the Nasdaq in January 2016.

By then, Peng was dabbling in e-commerce and the booming peer-to-peer (P2P) lending industry. He registered Solarbao.com in December 2014 in Suzhou, after the failure of an earlier e-commerce platform called Data Mall Service Social Technology Co. Ltd. That year, the number of P2P lenders in China began to surge, hitting a peak of more than 3,300 platforms in late 2015.

Solarbao.com claimed on its website that the platform could help facilitate funding for solar power manufacturers and for leasing projects, while providing higher returns for investors than bank deposits. It advertised annualized returns of 5.5% to 10%, compared with the one-year benchmark bank deposit rate of 1.5%. Peng also actively promoted the platform using different media outlets, including the finance channel of state-owned television network CCTV.

But the company’s business model has come under fire, with critics alleging it was merely a platform to raise money for itself, an activity that has been banned by regulators since August 2016.

According to 01caijing.com, an internet portal that tracks financial leasing companies and projects, around 75% of the 542 online projects posted on Solarbao.com’s platform was related to the operating company itself, involving a total 466 million yuan of fundraising.

In early 2017, investors who had lent money on the Solarbao.com platform found they were unable to withdraw their cash. In May that year, the platform admitted it was facing a liquidity crunch and capped total daily withdrawals at 60,000 yuan. So far, none of the investors have been able to get all of their money back, Caixin investigations have found.

Now, with the P2P lending boom turning to bust, China’s law enforcement agencies are under pressure to track down the operators and controlling shareholders of platforms that have run into trouble. And Peng is high on their list.