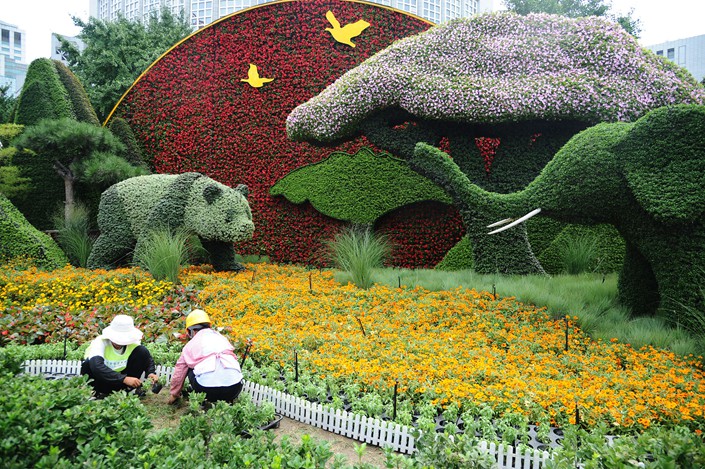 Sculptures of a giant panda and African elephant in a Beijing parterre on Wednesday mark the upcoming summit of the Forum on China-Africa Cooperation (FOCAC), which will be held in the Chinese capital. Photo: VCG

Delegates from dozens of African countries are expected to meet in Beijing in September for the sixth summit of the Forum on China-Africa Cooperation (FOCAC), China’s official platform for engaging with the continent.

Here are five things you need to know about the summit.

What does China aim to achieve?

The summit will be chaired by Chinese President Xi Jinping, and features the rosy theme “China and Africa: toward an even stronger community with a shared future through win-win cooperation.”

A major focus will be economic cooperation, at a time when trade tension between China and the U.S. is pushing the Asian country to strengthen ties within the global South. At the BRICS summit in July, leaders from China, South Africa, Russia, India and Brazil met to discuss trade cooperation, and signed a communiqué expressing their support for a “rules-based, transparent, non-discriminatory, open and inclusive multilateral trading system.”

Delegations at the FOCAC summit are expected to “further align the summit’s theme with the Belt and Road Initiative, the United Nations 2030 Agenda for Sustainable Development, the African Union’s Agenda 2063 and the development strategies of individual African countries,” according to a commentary published by China’s state news agency, Xinhua.

What do other FOCAC member states hope to get from the summit?

The African countries participating in this year’s FOCAC summit, which include all countries on the continent except eSwatini (formerly known as Swaziland), span a wide range of economic conditions and policy goals. But there are some common themes, including infrastructure investment and trade.

Meanwhile, President Mokgweetsi Masisi of Botswana has reportedly revealed plans to ask China for concessional loans or grants to fund the country’s road network and other infrastructure projects.

Jeremy Stevens, the Beijing-based chief China economist of Standard Bank of South Africa, said he will be “watching closely how Africa aligns itself more comprehensively with OBOR,” referring to the Belt and Road Initiative. “It is a clear priority for Beijing and most of the large Chinese companies that have built the roads, bridges and ports in Africa are now focused on OBOR. Africa needs to come up with a way to be part of this play,” Stevens told Caixin.

What have the results of Sino-African economic cooperation been so far?

China has been the largest source of bilateral loans to African countries since 1998, according to a January report by the Brookings Africa Growth Initiative. During the same period, trade between China and African countries grew more than fortyfold, although Chinese foreign direct investment in the continent remains low at around 5% of total inflow.

The increase in trade and financing flows between China and Africa have boosted growth in many African countries and “helped address crucial bottlenecks to industrial development and structural transformation,” while helping Chinese suppliers gain valuable project contracts on the continent, according to the Brookings report.

But African exports to China have fallen below Chinese exports to Africa in the years since the previous FOCAC summit in 2015.

“Typically, Africa is selling raw materials to China, and then purchasing higher-value add products from China. Indeed, some of China’s fastest growing export markets since 2010 have been in Africa,” Stevens from Standard Bank told Caixin.

“At some point, some of that production needs to be relocated to Africa, where markets are sizable,” Stevens said. “Somehow, the discussion needs to be why that isn’t happening faster; what can Africa do better on this score to attract Chinese manufacturing; and what policies can be put in place to motivate that offshoring to Africa. “

How has the world perceived China’s involvement in Africa?

Reactions to China’s growing involvement in African economies have run the gamut from celebrating South-South cooperation to accusing China of harboring colonialist motivations.

Some 62% of people surveyed in 37 African countries in 2015 said China’s economic and political influence on their country was mostly positive, according to pan-African research organization Afrobarometer. But voices criticizing China’s practice of extending massive loans as a debt trap for African countries have grown louder in recent years.

Beijing has responded to these allegations, with Foreign Ministry spokesperson Geng Shuang saying in March that China has “laid emphasis on enhancing African countries’ capability for independent and sustainable development so as to avoid adding to African countries’ debt burden.”

What tangible results will the summit produce?

Every FOCAC summit ends with the unveiling of a three-year action plan to be carried out by China and the African countries participating in the forum.

At the last summit, held in Johannesburg in 2015, China pledged to provide $60 billion in funding for the continent by 2018 through a combination of grants, aid, loans, and export credit. China also committed to assisting in a number of projects, including government scholarships for African youths, and a drive to bring satellite TV access to 10,000 villages across the continent.