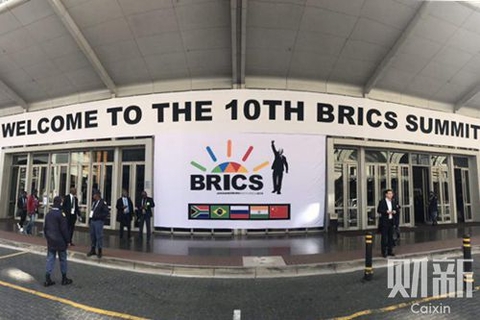 The heads of the five BRICS nations met this week in Johannesburg for a 3-day summit. Photo: Caixin

(Johannesburg) — The leaders of China, South Africa, Russia, India and Brazil voiced united support for the multilateral global trading system and blasted escalating protectionism in a communique signed Thursday on the second day of a three-day summit.

The heads of the five BRICS nations met this week in Johannesburg against a backdrop of rising protectionism and an anti-globalization campaign initiated by U.S. President Donald Trump that targets China and other countries for increased tariffs. The united posture signals shifting policies by the emerging markets and lays the foundations for closer trade and financial ties among the bloc.

In the document, the five BRICS leaders said the multilateral trading system was “facing unprecedented challenges” and reaffirmed their support for the World Trade Organization (WTO), which they described a trading mechanism that promotes a fair, just, equitable, democratic and representative international order.

“The escalation of protectionism and unilateralism are affecting developing and emerging markets,” the leaders said in the communique. “We the BRICS countries must therefore deepen our partnership underpinned by economic and security cooperation.”

“We reaffirmed the centrality of the rules-based, transparent, non-discriminatory, open and inclusive multilateral trading system, as embodied in the WTO ... and call for all WTO members to abide by WTO rules,” they said.

The consensus was in line with Xi’s comments Wednesday at the BRICS Business Forum warning that “no one will emerge as a winner” in a trade war, and that those who pursue authoritarianism will end up only hurting themselves.

Also addressing the business forum Wednesday, host Ramaphosa said there needs to be a thorough discussion of the role of trade in promoting sustainable development. He voiced concern that international trade laws are being violated as a result of countries acting unilaterally.

To offset the impact of trade frictions, China and India have been moving to expand cooperation within the BRICS bloc for the next decade by pledging investment in Africa before the summit. Xi promised $14.7 billion to South Africa Tuesday, and Modi announced that Uganda would receive $205 million from India to develop its agricultural sector and electricity distribution infrastructure.

In their declaration, the five leaders also addressed global issues high on the list of priorities for discussion, including international peace, security and trade.