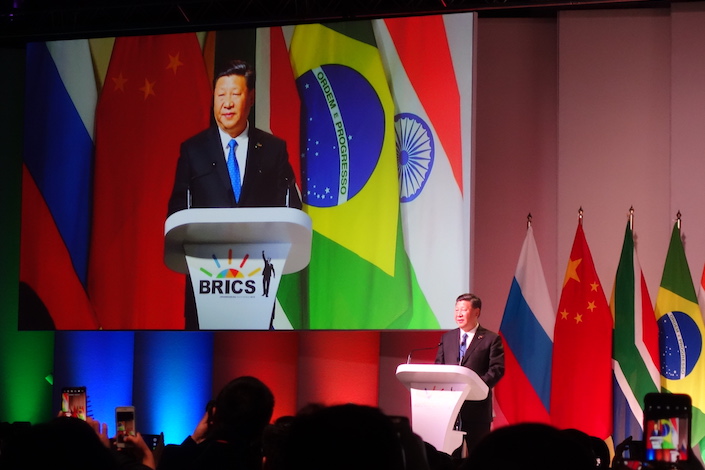 (Johannesburg) — Against a backdrop of rising protectionism, Chinese President Xi Jinping openly rebuked trade wars in a speech at the BRICS summit on Wednesday, and called on Brazil, Russia, India, China and South Africa to defend the current multilateral trading system.

This year’s BRICS summit, a three-day event in Johannesburg that opened Wednesday, is taking place just days after China rallied support of its fellow BRICS countries at a meeting during the Group of 20 summit, when he called on the five leading emerging nations to “fight against trade protectionism together.”

Protectionism and anti-globalization have been made one of the main topics for global forums this year as trade frictions between the U.S. and China increase. As the tensions continue to escalate after the U.S. implemented the first batch of tariffs on Chinese imports early this month, concerns on uncertainties and instability have spread to emerging economies.

Noting the situation, Xi openly criticized the trade war, saying that “no one will emerge as a winner” and adding that anyone who pursues authoritarianism will only end up hurting themselves.

He said that the tensions has pushed the international community to reach a “new crossroads” at which the rule-based trading system is under threat.

“We are facing a choice between cooperation and confrontation, between opening-up and a closed-door policy, and between mutual benefit and a ‘beggar-thy-neighbor’ approach,” Xi told about 1,200 business leaders and government officials attending the BRICS Business Forum.

“The current international order is not perfect, but as long as it’s based on rules aimed to be equitable and to create win-wins outcomes, then such order should not be abandoned as one pleases, or overthrown to start over again,” he said.

Xi predicted that the second decade of BRICS cooperation will see an accelerating change in the global landscape and more power struggles. The president outlined a vision for a new global governance system in which BRICS could play its part in this situation.

“The next decade will see a profound reshaping of the global governance system,” he said. “The collective rise of the emerging markets in unstoppable. In that sense, BRICS countries should follow the mainstream of history and play a more-constructive role.”

The BRICS summit was the penultimate stop in Xi's weeklong tour of Africa, a trip that was seen to unite allies in the continent. The visit included stops in Senegal, Rwanda and South Africa, and will conclude in the Indian Ocean island nation of Mauritius.

Before arriving in Johannesburg, Xi signed dozens of trade and investment deals, including a $126 million loan agreement for two road projects in Rwanda, and a total $14.7 billion investment pledge in South Africa on Tuesday.