Emerging Markets Should Collaborate in Face of Protectionism, Experts Say 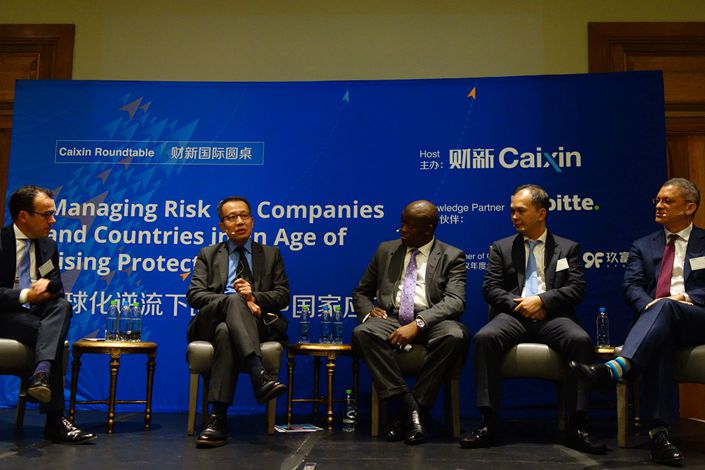 Experts attending a Caixin-sponsored BRICS roundtable in Johannesburg on Tuesday debate how emerging economies should manage risks to companies in an age of rising protectionism. Photo: Leng Cheng / Caixin

* For emerging economies, uncertainties in the global economy have been increasing as trade tensions rise

* Cooperation among advocates of global free trade, including the BRICS countries, could help to offset some of the pressure, experts said

(Johannesburg) — Against a backdrop of rising protectionism as a key theme at the BRICS summit this week in South Africa, bankers and experts from the five countries called for more collaboration and local problem-solving to offset the effects of global trade tensions.

Protectionism and anti-globalization have been two of the biggest issues globally this year, embodied in the ongoing trade frictions between the U.S. and China. That has led to risks associated with unpredictability for countries worldwide, as U.S. President Donald Trump threatens new tariffs as punishment for unfair trade practices against not only China but other countries as well.

In a meeting during the Group of 20 summit of finance ministers and central bankers in Buenos Aires last week, China rallied the support of its fellow BRICS countries — Brazil, Russia, India and South Africa — to “fight against trade protectionism together.” It also pushed for advanced nations to adopt “responsible” economic policies, and “closely” monitor the pressure on capital flows in emerging markets brought forward by policy changes in developed nations.

For emerging economies, uncertainties and instability in the global economy have been increasing as trade tensions rise. An escalation in such tensions could derail a global recovery and further depress medium-term growth, Zhang Tao, deputy managing director of the International Monetary Fund (IMF), told a Caixin BRICS roundtable in Johannesburg on Tuesday — a day before the start of a BRICS summit, which Chinese President Xi Jinping is attending.

“Global growth expansion is becoming less even, and its rate appears to have peaked in some major advanced economies,” Zhang said. “Rising oil prices, escalating trade tensions, higher yields in the U.S., and market pressures on emerging markets’ currencies are challenging the outlook. These challenges are likely to persist, and this is why we see rising downside risks to the outlook even in the near term.”

Cooperation between advocates of a global free trade system, including the BRICS countries, could help to offset some of the pressures and uncertainties, experts said. That could be helped by the brewing concept of a “BRICS Plus,” which would involve adding more emerging countries to the five-member alliance and deepening the alliance itself, they added.

“Most of the key problems the world is facing today, such as issues of protectionism, cybersecurity, international financial flows or global trade, all have a transnational nature,” said Leslie Maasdrop, chief financial officer of New Development Bank, the Shanghai-based multinational bank formed by BRICS member countries. “If the problem is global and has a transnational character, the solutions also have to be global and transnational.”

Chen Siqing, chairman of Bank of China, one of the nation’s four largest state-owned banks, echoed the view that BRICS cooperation could reshape the global landscape. Chen emphasized at the roundtable that such cooperation will provide new alternatives as “the global free trade system has reached a relatively difficult time.”

Still, emerging countries shouldn’t be too quick to blame protectionism for slower growth, and should also be prepared to do some self-examination, experts said. Countries need to look within themselves to determine whether they have addressed domestic problems like widening income gaps that have left many people behind despite their broader growth.

“The Trump phenomenon and anti-globalization has a fundamental reason,” said Cai Jinyong, Goldman Sachs’ former top executive in China and former CEO of the International Finance Corp., a member of the World Bank Group. “Globalization is said to bring wonderful things, but it will remain on the level of talk if there’s no local solutions. Unless we address some of the most fundamental issues, such as the inclusive growth, we are going to have more problems.”

“But the truth is they need internal structure reforms. … Our own country, for example, should deal with the cost of its economy, and make sure that it prepares itself to be more competitive in an environment of freer and fairer trade.”

Developing countries also need to be careful not to exaggerate the role of the state in economic development at the expense of paying too little attention to the importance of market forces, said Martyn Davies, managing director of emerging markets and Africa at Deloitte.