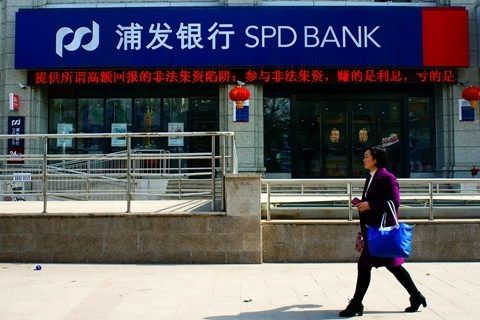 Nearly 100 employees at the Chengdu branch of SPD Bank have been punished for involvement in the loan fraud case. Photo: Visual China

Shanghai Pudong Development Bank was fined $72 million for illegal lending activities, marking one of the stiffest penalties handed out so far in China’s crackdown on wrongdoing in its financial markets.

The regulator said the Chengdu branch of SPD Bank worked with seven property and mining companies to set up about 1,493 shell companies to transfer risky debts to help the bank cover bad loans. The bank issued 77.5 billion yuan worth of credit lines to the shell companies by falsifying business and employing other irregular methods.

“It is an organized fraud case led by the Chendu branch of SPD Bank,” the regulator said.

Last year, the regulator imposed fines totaling 2.9 billion yuan on 1,877 banking institutions, according to figures released by the CBRC earlier this month. The biggest penalty — 722 million yuan (more than $100 million) — was slapped on China Guangfa Bank for fabricating guarantee documents.

In a statement this month, the CBRC vowed to intensify its crackdown on lender misconduct, focusing on interbank deals as well as potentially risky lending outside the formal banking system known as “shadow banking.” The regulator warned that the country still faces “complicated and grave” possible financial risks.

In the SPD Bank case, Wang Bing, the former president of the Chengdu branch who retired last year, has been expelled from the Communist Party, according to the CBRC. Wang and four other senior executives were meted out lifetime bans from the industry. Caixin learned that nearly 100 employees at the Chengdu branch have been punished in the case.

People close to the matter told Caixin that the illegal lending practices led to 10 billion yuan in bad assets for the bank. The Shanghai-based headquarter set aside provisions to cover the bad assets and has controlled fallout from the fraud, said the sources.

SPD Bank’s earlier this month reported a net profit for 2017 of 54.2 billion yuan, up 2.2% from the previous year. The bank has 6.1 trillion yuan in total assets with a non-performing loan ratio of 2.14%.

The banking regulator launched an investigation into SPD Bank’s Chengdu branch this past April and ordered the bank to correct problems that led to the fraud by September 2017. The CBRC also punished several official at its own Sichuan bureau for failing to properly supervise the bank.