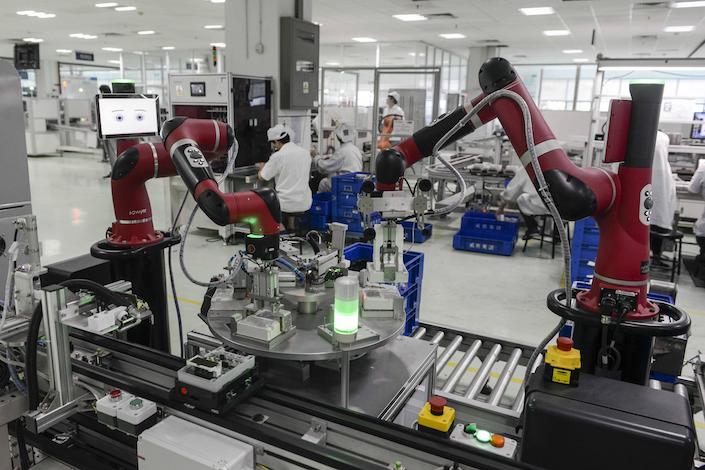 The rapid development of the artificial intelligence (AI) industry in China is expected to exacerbate structural unemployment, according to a new report.

AI has replaced humans in repetitive jobs in many areas, but high-tech workers are in short supply, posing challenges to educational and research institutions, industries and the social security system to address structural unemployment, according to the report by the China Development Research Foundation (CDRF).

The report echoed previous downbeat assessments of AI’s impact on job markets. The World Economic Forum estimated in 2016 that 7.1 million jobs could be eliminated by AI by 2020 in 15 major developed and emerging economies. That would only be partially offset by the creation of 2.1 million new jobs.

During the past three years, some enterprises have replaced 30% to 40% of their laborers with autonomous machines in Guangdong, Zhejiang and Jiangsu provinces, where manufacturing industries are concentrated, the CDRF report showed.

In Eastern China’s Jiangsu province, an original equipment manufacturer for Apple Inc. has found that autonomous equipment costing 130,000 yuan ($19,000) is equivalent to the costs of two workers doing the same job for one year. That means the company could recover its equipment cost in a year, according to Hao Jingfang, CDRF’s deputy director of research who is also a winner of the Hugo Award for science fiction.

Meanwhile, the development of AI is also creating a need for more high-tech workers. For example, enterprises in Dongguan, a manufacturing hub in South China's Guangdong province, have recently found it extremely hard to find skilled workers in technical and autonomous control-related positions, the CDRF report showed.

The IMF called for countries to tackle disruptions caused by automation and robots by revamping their education systems and investing in innovation to support a workforce for humans and robots alike.

“Investing in people is not only for humanitarian purposes, but also necessary for the economy and society,” Hao said. “Otherwise, the structural imbalance of talents will be difficult to adapt to the development of the next era.”