By Wang Luyao and Ke Dawei 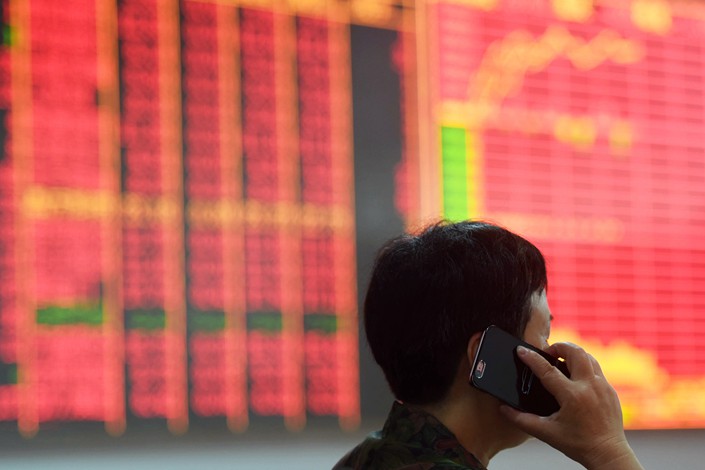 An investor talks on his phone at a brokerage in Hangzhou, Zhejiang province on July 24. Photo: IC

China’s stock market regulator has proposed relaxing requirements for infant biopharmaceutical, security and microchip companies looking to list on the Chinese mainland, in an effort to support the country’s drive to develop its high-tech capabilities.

The China Securities Regulatory Commission (CSRC) published a raft of documents on Friday suggesting that the State Council, China’s cabinet, do away with rules requiring that companies in the sectors become profitable before listing on the Shanghai and Shenzhen stock exchanges.

Regardless of their potential, biopharmaceuticals, security surveillance and microchip companies often struggle to make a profit in their first few years as they focus on the research and development of an advanced product, rather than sales. The CSRC’s proposals would allow them to attract additional investment in their nascent years. The documents do not provide details on how the changes might be implemented in practice, however.

The proposals give momentum to suggestions made during the “two sessions,” China’s annual meeting of its top legislative and advisory bodies, that more be done by financial markets to support tech development. It also supports the government’s wider effort to upgrade China’s high-tech manufacturing capabilities as part of its “Made in China 2025” program, in a pivot away from intensive, low-end manufacturing and infrastructure-led growth.

The CSRC suggestions complement efforts by regulatory authorities to encourage China’s overseas-listed tech giants to also list on the domestic stock marks through its Chinese depositary receipts (CDRs) program. Around 26 Chinese tech companies have sold $8.5 billion new shares through IPOs as part of the CDR trial program that launched this summer, although it was something of a letdown when tech leaders such as Alibaba Group Holding Ltd. and JD.com Inc. failed to reach agreements with regulators in time for the launch.

The CSRC rules show that the government is looking to capitalize on the vast potential of China’s medical tech industry, with the domestic market expected to rise from $122.6 billion in value in 2017 to around $175 billion by 2022, according to health-care company IQVIA. Biopharmaceuticals, which includes innovations such as such using big data for gene sequencing, are expected to experience major growth, with financing in the global medical industry rising 57% year-on-year in 2017 to 151.1 billion yuan ($22.1 billion), according to industry platform vcbeat.net.

However, even if the State Council approves the CSRC’s suggestions, domestic bourses may struggle to attract companies lured by the Hong Kong stock exchange.

The Hong Kong exchange has already relaxed profitability requirements, but also provides much more concrete guidelines on other key areas for biopharmaceutical firms, such as requiring that companies looking to list first qualify for clinical trials for their drugs or medical devices. The Hong Kong exchange also has the advantage that it is much easier for firms listing there to offer equity incentives for foreign talent whom the infant company might want to attract, whereas it is much harder to do so on the Chinese mainland, according to industry experts.

In contrast, efforts to encourage security and chip companies to list on the domestic bourses may prove more successful, as such companies often rely on government procurement contracts and may therefore be more easily influenced by the government. For example, security companies such as camera-maker Xiamen Meiya Pico Information Co. Ltd. look to the government as a major potential customer.