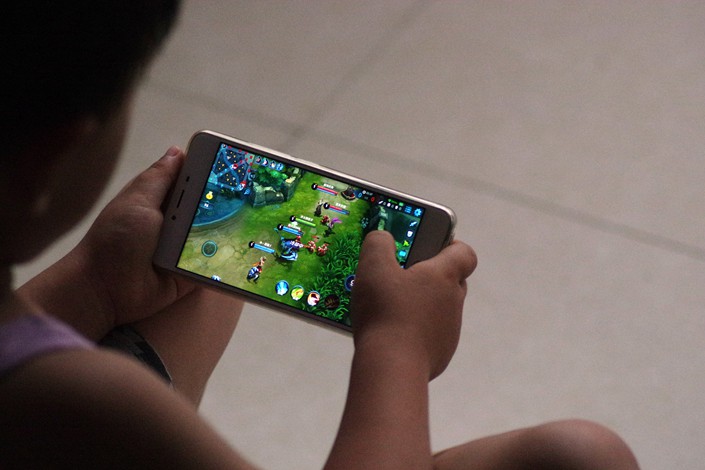 A child plays the video game “Honour of Kings” on his mobile phone in July 2017 in Dezhou, Shandong province. Photo: VCG

Shares of Hong Kong-listed Tencent closed down 3.14% on Thursday in reaction to the move, which could trim user penetration for one of its hottest titles, “Honour of Kings,” the Chinese version of “Arena of Valor.”

Tencent had required players of the game to register using their real identities starting in May 2017, and promised the government that it would limit daily game playing-time to two hours for minors, but some players have used various tactics to circumvent that rule, such as using their parents’ IDs or simply buying one online.

Under the “strict” system, which will go into effect around mid-September, minors will no longer be able to cheat the system, which will be linked to a database of the public security department that will verify the registrant and his or her identity, according to a Tencent statement (link in Chinese).

The announcement came just days after Beijing issued other controls on video games, citing concerns of vision problems among students.

As China’s top game developer and publisher, Tencent is inclined to follow government orders, even at its own cost. In the second quarter, it suffered its first quarterly profit drop in 13 years after the government froze the approval of new games in March.

“Honour of Kings” is the first game in China to be linked to the public security identity database, which will be extended to other Tencent titles.

The game, in which five players battle against another team of five, gained popularity last year in China, and is still the highest-grossing app on Apple’s App Store in the domestic market, according to a real-time ranking by app tracker App Annie.