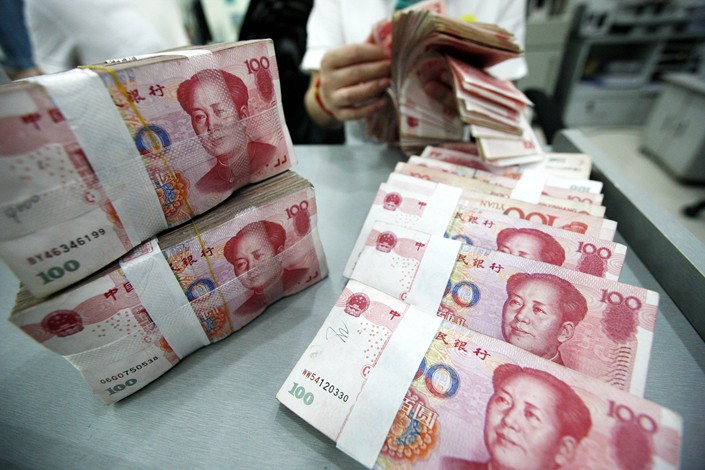 A teller at an Industrial and Commercial Bank of China branch in Anhui province counts yuan notes. Photo: VCG

(Bloomberg) — China’s banking regulator is handing out fines at a record pace as it battles a build-up of financial risk.

The China Banking and Insurance Regulatory Commission (CBIRC), along with its predecessor agency, has issued fines worth about 4 billion yuan ($585 million) since Chairman Guo Shuqing took charge of the watchdog in early 2017, compared with a total of some 1 billion yuan in the previous 14 years of the regulator’s history, according to data compiled by UBS Evidence Lab. The bank regulator, which merged with the national insurance agency in March, has averaged more than 110 fines a month under Guo, compared with 26 a month between 2003 and 2016.

Most of the recent fines were for hiding bad loans, which shows that the CBIRC is increasingly focused on addressing the existing stock of debt held at banks as part of its deleveraging campaign, said Jason Bedford, executive director of Asian financials research at UBS Group AG in Hong Kong, whose team analyzed the data.

The agency under Guo has imposed penalties as large as $110 million, fired banks executives, and publicly disclosed the violations. The enforcement is in line with President Xi Jinping’s campaign to cut risky debt in the economy. Soured loans in China’s banking sector swelled by an unprecedented 183 billion yuan in the second quarter as stricter rules hit rural banks in particular.

Guo, who’s also deputy governor of the People’s Bank of China, told the state-run People’s Daily earlier this year that there’s a need to dismantle the “shadow banking sector and suppress household leverage. Regulators aim to address shortcomings such as the low cost for enterprises to break rules, Guo said in a June speech at the Lujiazui Forum, an annual gathering of financial regulators and experts in Shanghai.