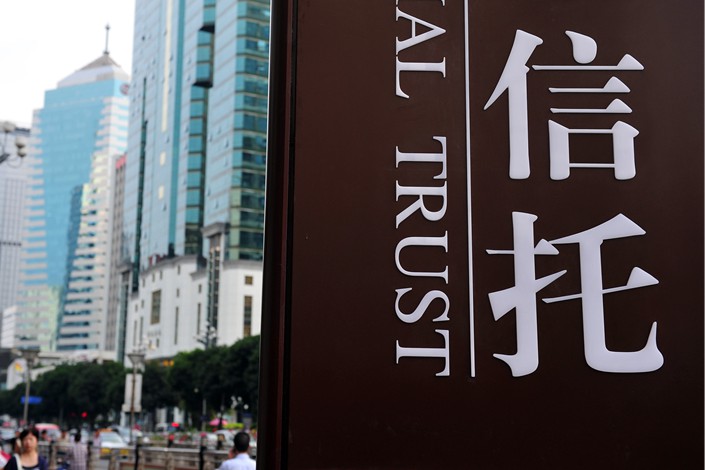 China’s trust sector has been reeling from new rules that tighten controls over the $16 trillion asset management sector. Photo: VCG

* Assets under management of the country’s 68 trust companies via the channeling business fell 4.3% over the first four months on this year

In a sign China’s regulators are concerned that tough controls over shadow banking may be choking off credit and exacerbating a slowdown in economic growth, trust companies have reportedly been told they can carry out some types of channeling business if it serves the real economy.

Regulations issued in April to overhaul the country’s unwieldy asset management industry included measures to curb the channeling business, which banks had been using to hide risks off their balance sheets. Institutions have been given a grace period for compliance that extends to the end of 2020.

The rules created significant uncertainty in the trust industry, prompting regulators to issue guidelines recently in an effort to clarify what companies can and can’t do. The China Securities Journal reported on Wednesday that trusts will be able to conduct some service management, a type of channeling business, as long as it complies with regulations and provides funds to the real economy.

The newspaper, which cited an unnamed source close to regulators, said that restrictions will be maintained on service management business that seeks to exploit loopholes to facilitate lending that violates regulations. Scrutiny of trust agreements and the source and use of the funds will be stepped up to ensure they obey the rules, it said.

The new guidelines could breathe new life into the trust industry, the newspaper citied analysts as saying. The sector has been reeling from policy uncertainty created by a series of new rules to tighten controls over the $16 trillion asset management sector. A final version of a new regulatory framework first issued in November 2017 was published in April, followed by more-detailed guidelines including those issued by the central bank in July. The latest guidance for the trust industry reported by the China Securities Journal has not yet been published.

Allowing certain types of channeling business to grow will make monetary policy more effective in supporting economic growth, because the operations can direct lending to sectors that have limited access to bank loans, Yuan Jiwei, a researcher in the trust industry, was cited as saying in the report.

Service management is one of the three main business activities of trust companies in China, along with investment and financing. It allows banks, companies and high-net-worth individuals to invest customers’ deposits or their own cash in high-yield products via trusts to achieve higher returns. Trusts channel the credit to borrowers that are usually shut out of the formal lending system, such as local government financing vehicles and real estate developers, and earn commission on the deals.

Channeling has been one of the main targets of the government’s crackdown on shadow banking, because it’s been difficult for regulators to monitor who the real borrowers are and it allows banks to hide the risks they are exposed to.

Since last year, the banking regulator has issued several policies designed to rein in off-balance sheet lending based on partnerships between banks and trust firms. The final version of the asset management regulations issued in April set further restrictions on the channeling business with stricter requirements imposed on leverage ratios and investment.

The tighter regulatory environment has had a pronounced effect on the industry. Assets under management of the country’s 68 trust companies via the channeling business totaled 14.97 trillion yuan ($2.19 trillion) at the end of April, a decline of 670 billion yuan, or 4.3%, from the end of last year, according to latest available government data. The fall was in stark contrast with the rapid expansion of the business over the past few years. Official figures showed that trust companies’ channeling business assets rose from 1 trillion yuan to 15.6 trillion yuan from 2013 to 2017, with its share in total trust assets surging from less than 20% to nearly 60%.

Yuan said he expects the new guidelines will slow the contraction of the trust industry’s channeling business, according to the China Securities Journal.

The newspaper report comes as the government is encouraging banks to lend more to bolster economic growth as the deleveraging campaign, curbs on local government debt, and the regulatory overhaul of the asset management industry have had a chilling effect on the amount of credit circulating in the economy.

Although formal bank lending has held up, growth in total social financing (TSF), a broad measure of credit and liquidity in the economy that includes bond and equity sales, and shadow banking activities such as trust loans, has been contracting. TSF in July was 1.04 trillion yuan, a drop of 10.7% year-on-year. Trust loans fell by 119.2 billion yuan, compared with an increase of 123.2 billion yuan a year ago, according to central bank data.

The regulator has also been pushing commercial banks to boost lending to the real economy to ensure that there is money available for investment.

The lack of financing has contributed to the slowdown in growth in fixed-asset investment. Government data show investment rose by 5.5% in the first seven months of this year, a record low, and down from 8.3% in the same period in 2017.