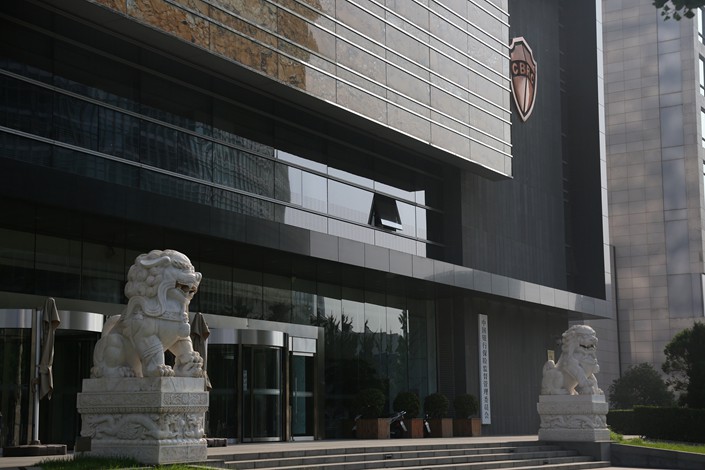 The national headquarters of the China Banking and Insurance Regulatory Commission in Beijing. Photo: VCG

*After urging tightened lending for two years, fears over slowing growth has prompted the banking regulator to tell banks to “increase financing support for the real economy”

*The regulator highlighted the need to open the credit taps for infrastructure projects, but its silence on real estate was seen as signifying that lending will remain tight in this sector

(Beijing) — China’s banks have been told by the regulator to lend more money, the latest attempt by the authorities to open the credit taps as a deepening trade row with the U.S. threatens to exacerbate a slowdown in economic growth.

The China Banking and Insurance Regulatory Commission (CBIRC) offered its encouragement in a statement (link in Chinese) released on Saturday, fleshing out recent decisions from the Politburo, a committee of the top 25 officials of the ruling Communist Party, and the State Council, the cabinet, to increase support for the economy through monetary and fiscal policies.

The commission said it will “guide banking and insurance institutions to have an accurate grasp of the relationship between promoting economic growth and controlling and preventing risk, and to correctly understand the intentions of regulatory policies.” Lenders should “make full use of the current favorable conditions of ample liquidity, and stable and declining financing costs, to expand the supply of credit and increase financing support for the real economy,” according to the statement.

Banks should also take a more-tolerant approach to the bad debts of small companies, and try to solve the problems faced by small enterprises in obtaining loans and securing low-cost financing, according to the statement.

China’s policymakers have spent the last two years urging banks to control their lending and step up risk controls as part of an overarching campaign to rein in leverage in the economy. Years of loose monetary policy and uncontrolled growth in “shadow banking” has pushed corporate debt up to a staggering 165% of gross domestic product (GDP) and the country’s overall debt-to-GDP ratio at 253%, according to International Monetary Fund statistics.

But the campaign led to a severe squeeze on the liquidity that was oiling the wheels of shadow banking, sending market interest rates soaring and making it increasingly difficult for companies to get financing. Efforts to cut the debt of local governments also left them strapped for cash to fund infrastructure spending and many projects were suspended partly due to a lack of money and partly due to orders by the central authorities to stop some types of investment.

Over the past few months, the government has relaxed its tightening policies as concerns grew that economic growth was slowing too rapidly and that companies couldn’t get loans to finance their businesses.

A meeting of the Politburo on Aug. 1 indicated that policymakers would take a less-aggressive approach to deleveraging and increase their focus on maintaining economic stability. Other regulators, including the central bank and the economic planning agency also hinted they will ease pressure on private companies whose funding sources have been severely squeezed by the crackdown on shadow banking.

Caixin has learned that quota limits on bank loans were relaxed about two weeks ago, around the same time the government indicated that the deleveraging campaign was taking a milder tone. Data released in the CBIRC statement showed that total new yuan loans issued in July were 1.45 trillion yuan ($211.8 billion), 623.7 billion yuan more than the same month last year.

The commission highlighted the need for banks to provide loans for infrastructure projects, noting this is a sector that needs “increasing financial support.” The guideline follows the State Council’s call in July for more spending on infrastructure projects after a slump in investment growth in the first half of the year.

State-owned banks have started preparing for the initiative, sources have told Caixin. Industrial and Commercial Bank of China (ICBC), the largest of the “big four” commercial banks, has asked its branches to be prepared to offer loans to corporate customers in “key areas,” particularly those involved in infrastructure, shantytown renovation or major projects under construction, the sources said.

The CBIRC also noted the need for banks to implement the policy on refinancing loans, which allows small and family-owned businesses facing temporary funding problems to renew working capital loans without first repaying the original loan. The policy, introduced in 2014, has aroused controversy recently over concerns that although it can help tide companies over, it may also allow “zombie companies” to stay afloat.

But the opening of the credit taps does not appear to extend to real estate. The CBIRC’s statement didn’t offer guidance on lending to the property sector, an omission seen by some banking sources as reaffirmation that there will be no change to the tight control on financing.

Last Friday, Shanghai branches of ICBC and Agricultural Bank of China tried to increase the discount they offer on home loan rates to 10% of the benchmark lending rate from 5% to attract more mortgage applicants. But their efforts were short-lived — the new deals were withdrawn by the end of the day on the orders of the banks' headquarters on fears the change might incur the wrath of regulators.