No Letup in China’s Campaign to Cut Corporate Debt 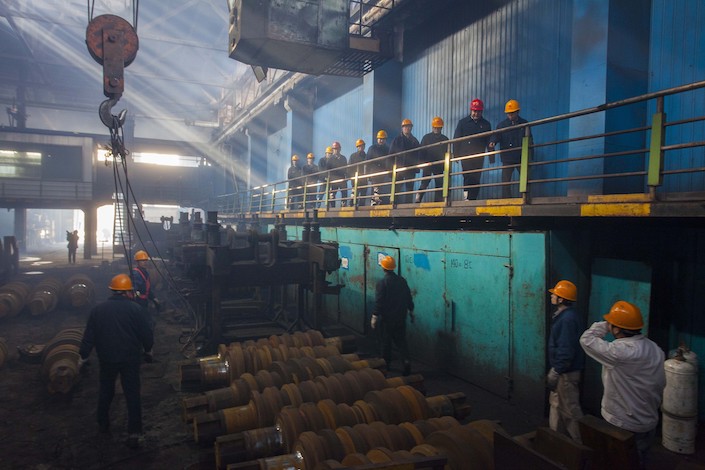 Workers prepare to dismantle machinery at a state-owned Jigang Group Co., Ltd. facility in Shandong province, on its last day of operation on Mar. 12, 2016. Photo: VCG.

* Mechanism will be set up to control the debt level of state-owned enterprises, and red lines will be set for debt-to-asset ratios that must not be crossed

Chinese policymakers have signaled that curbing corporate debt, especially at state-owned enterprises, is still on the government’s agenda even as fiscal and monetary policies have taken a more pro-growth stance.

Five government bodies, including the central bank and the top economic planning agency, issued a joint statement (link in Chinese) late Wednesday vowing to persist with efforts to reduce corporate leverage ratios this year as part of the government’s ongoing strategy to control financial risks in the economy. The statement laid out 27 key action points to accelerate the campaign, including accelerating the disposal of the debts of “zombie companies,” removing legal barriers to bankruptcy proceedings, and improving an early warning system for corporate debt risks.

China’s stock and bond markets have recently started to anticipate that the government may relax its campaign to tackle the country’s sky-high leverage, as economic growth has slowed and financial distress has increased in the face of a crackdown on “shadow banking” and risks in the financial system. A meeting of the Politburo last week pledged to continue deleveraging efforts but at a “measured pace and strength,” which many investors took as an indication that a loosening was on the cards, especially given the leadership’s emphasis on a pro-active fiscal policy and supporting growth.

The latest deleveraging plan, which is being led by the National Development and Reform Commission, has a strong focus on tackling the high borrowings of state-owned enterprises (SOEs), which account for the majority of the country’s corporate debt pile.

A mechanism will be set up to control the debt level of SOEs, focused on large companies, and red lines will be set for debt-to-asset ratios that must not be crossed, the statement said. Borrowings will be monitored, and if they go over a certain level, companies will be required to submit proposals on how to cut their debts.

Proposals put forward in the statement include faster implementation of the debt-for-equity swap program, which allows creditors to exchange debts for an equity stake in the company. The statement said more financial institutions will be brought in to take part in swaps, and additional policy support will be given to them. A trial program will begin that will allow nonlisted companies to trial swaps that involve swapping debt into preferred shares.

Monetary policy tools will also be used, the statement said. It highlighted the possibility of targeted cuts in banks’ reserve requirement ratios, which would provide cheaper funding for debt-for-equity swaps. Companies will also be allowed to turn to the capital markets to raise funds for swaps, including undertaking initial public offerings.

Wednesday’s statement reaffirms that the government’s deleveraging campaign is taking a milder tone, said Liu Chenming, an analyst with TF Securities Co. It also indicates a shift in emphasis toward SOE debt, and execution of the plan may lead to less pressure on private companies whose funding sources have been severely squeezed by the crackdown on shadow banking.

“The financial deleveraging campaign has forced some companies to pay back their debts using cash or reduce net borrowing, which has squeezed their ability to invest,” Chung said. “So the push on debt-for-equity swaps has its advantages because the resolution of the debt will reduce the companies’ balance sheet leverage and give them room to borrow to fund new investments.”

However, swaps still aren’t attractive enough to private investors, who lack sufficient incentive to get involved, he said. Investors will still find it difficult to get a say in the running of the company or a seat on the board, which will further weaken their motivation, he said, adding that this is one of the outstanding challenges that needs to be overcome in order to make progress on the initiative.

“The key point (for an investor) is how to enhance the operational efficiency and profitability after the swap is completed so that investors can enhance the returns on debt-swapped equity,” Chung said.

Contact reporter Leng Cheng (chengleng@caixin.com)
You've accessed an article available only to subscribers
Subscribe today for just $.99.
VIEW OPTIONS
Share now and your friends will read it for free!
Share this article
Open WeChat and scan the QR code
MOST POPULAR
GALLERY
SPONSORED