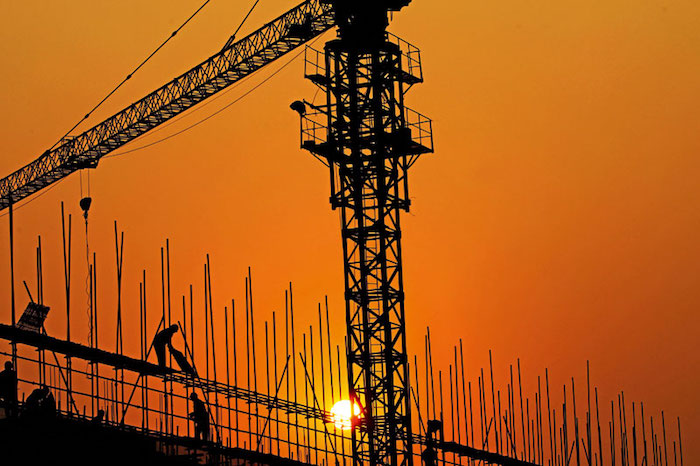 The Politburo pledged that China will still try to hit the national growth target in the face of economic challenges. Photo: VCG

* China will continue deleveraging efforts but with measured pace and strength, Politburo says

China’s top leadership pledged to maintain economic stability while continuing debt reduction efforts in the face of challenges including slower growth and an intensifying trade war with the U.S.

The Chinese economy faces “new problems and new challenges,” and “there are obvious changes in the external environment,” the Politburo said in a statement after a meeting Tuesday of the ruling Communist Party’s top decision-making body.

Despite the challenges, China will still try to hit its growth target and keep economic expansion within a reasonable range, the Politburo said. Policymakers will focus on stabilizing the job market, the financial system, trade, investment and market expectations, according to the statement (Link in Chinese) issued after the meeting chaired by President Xi Jinping.

The meeting came amid rising expectations that China should adopt more-expansive policies as the world’s second-largest economy comes under pressure. China has shown signs of slower growth amid decelerating credit and investment after a years-long deleveraging campaign that has squeezed some businesses. The escalating trade tensions with the U.S. have further complicated the outlook.

Based on recent statements by the leadership, analysts said there would not be fundamental changes in macroeconomic policy. But marginal adjustments will be made to offset pressures from external uncertainties and the domestic deleveraging campaign to avoid sharp deceleration, said Zhang Ming, a researcher with Chinese Academy of Social Sciences (CASS), in a research note.

China’s economy grew 6.7% year-on-year in the second quarter, the slowest since the July-September quarter of 2016. China’s official manufacturing purchasing managers’ index fell to a five-month low of 51.2 in July, reflecting weakening demand amid trade frictions, the National Bureau of Statistics said Tuesday.

The International Monetary Fund last week projected that China’s economic growth would slow slightly to 6.6% this year from 6.9% in 2017, but in line with the official target of 6.5%. The IMF added that external risks have increased with tightening global financial market conditions and the rising trade tensions.

China will enhance policy coordination and take targeted measures to address the challenges, the Politburo said. The body emphasized continued focus on reducing debt but said policymakers will carefully control the pace and strength of deleveraging measures and coordinate policies.

China will step up infrastructure investment in targeted areas, support innovations, lower corporate costs and revitalize the countryside, according to the statement.

Zhang said fiscal measures will play a more active role than monetary measures in the second half this year. And infrastructure investments in the western and central regions are expected to accelerate, he said.

At a meeting last week chaired by Premier Li Keqiang, the cabinet promised 1.165 trillion yuan ($172 billion) of reductions in taxes and fees for businesses and a 1.35 trillion yuan spending plan for local government infrastructure projects.

The Politburo reiterated its commitments on reform and opening up the economy, as well as reining in excessive housing price increases. China will accelerate establishing a long-term mechanism for the property sector to ensure stable and healthy development of the market.

Zhang at CASS said policymakers are likely to take measures to increase housing supplies in large and medium-sized cities while accelerating the delivery of the long-expected property ownership tax, intended to help curb real estate speculation.