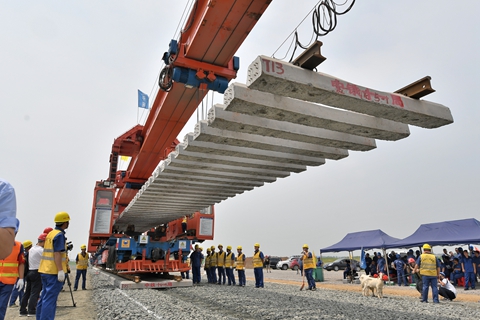 China’s top leadership has restored infrastructure investment as a top priority, fueling expectations of a new construction spending spree as the government counters the effects of slowing domestic growth and the trade war with the U.S.

But the investment rush has yet to come into view.

Several provincial-level governments have acted on the central government’s call to put more money into infrastructure projects, but so far, most of those on the agenda are ongoing projects rather than new investment.

The support would be funded through the issuance of special bonds for infrastructure investment and would represent a 69% increase over last year’s 800 billion yuan.

With slowing economic growth and the trade dispute escalating, the new pledge is seen as a shift from China’s years-long deleveraging campaign that tightened government borrowing.

While local governments are responding to policymakers’ calls, actions so far are no more than routine follow-through on existing projects. Among the 2018 infrastructure projects announced by Guangdong province on July 9, for example, 70% are existing projects and most started construction before 2018.

Analysts expect the effects of the special bonds for infrastructure projects to be limited. Most of infrastructure investment will accelerate existing projects rather than launching new ones, analysts said.

During a recent trip to the Tibet autonomous region, Premier Li visited a railway construction site, saying Beijing would invest more in infrastructure to help the economy in midwest China.

It was the first publicly reported visit by a Chinese premier to Tibet in recent decades, leading some to expect that the priority of infrastructure investment will be in the western and central regions. But some analysts suggested a more effective boost to economic growth would be spending in bigger cities with population inflows and faster growth prospects.

As a result of urbanization and the population’s aging, in the next three to five years more young people will flow to first- and second-tier cities, and third- and fourth-tier cities will face a net outflow of residents, especially among young workers, said Lu Ting, chief China economist at Nomura Holdings Inc. in Hong Kong.

This means the future returns of infrastructure investment in the third-and fourth-tier cities could be low, Lu said.