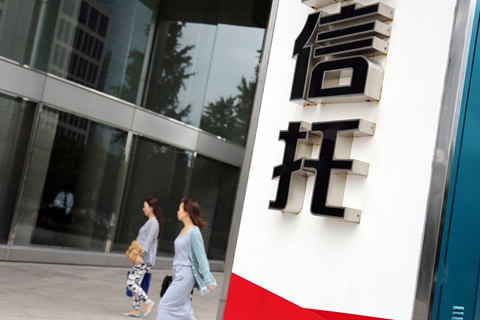 Trust companies have pledged to slim down the channeling business in the face of tightening regulation. Photo: IC

China’s trust industry is showing signs of a pullback from aggressive growth that relied mainly on unchecked “shadow banking” amid a regulatory crackdown on financial risk.

Data released by China’s banking and insurance regulator Wednesday showed that assets managed by the country’s 68 trust companies via the so-called “channeling business” totaled 14.97 trillion yuan ($2.34 trillion) by the end of April, a decline of 670 billion yuan, or 4.3%, from the end of last year.

In channeling, banks, companies and high-net-worth individuals invest customers’ deposits or their own cash in high-yield products via “channels” — which are usually nonbank vehicles such as trusts — to achieve higher returns.

For example, a bank might raise money by selling wealth-management products and then invest the funds in trust products, which funnel the capital to borrowers that are usually fenced out of the formal lending system, such as local government financing vehicles and real estate developers. Banks bear the risk, while trusts simply channel the money and earn commission fees.

Shrinking assets in the channeling business indicate that regulatory measures since last year targeting on the once loosely regulated practice have started to show effects. In the last quarter of 2017, such business assets had continued expanding from the third quarter, according to official data.

From 2013 to 2017, trust companies’ channeling business assets rose from 1 trillion yuan to 15.6 trillion yuan, with its share in total trust assets surging from less than 20% to nearly 60%.

Total assets managed by trust companies dropped by 830 billion yuan to 25.41 trillion yuan by the end of April, according to China Banking and Insurance Regulatory Commission. The share of channeling business assets declined from almost 60% at the end of 2017 to just under 59% as of April 30.

Regulators have been trying to curb the channeling business as concerns mounted about the rampant growth of shadow banking, which allows banks to bypass lending rules and fuels the rapid buildup of corporate debt.

Since last year, the banking regulator has issued a series of policies designed to rein in off-balance sheet lending activities based on partnerships between banks and trust firms. The issuance of the long-awaited framework regulations for China’s asset management industry in April will further curb the channeling business with stricter requirements on leverage and investment of asset management products.

Since December, trust companies including CiticTrust and China Fortune International Trust Co., have made public statements pledging efforts to slim down their channeling business this year.

The CBIRC said Wednesday that it will further enhance supervision of the trust industry and strictly implement the new asset management rules.