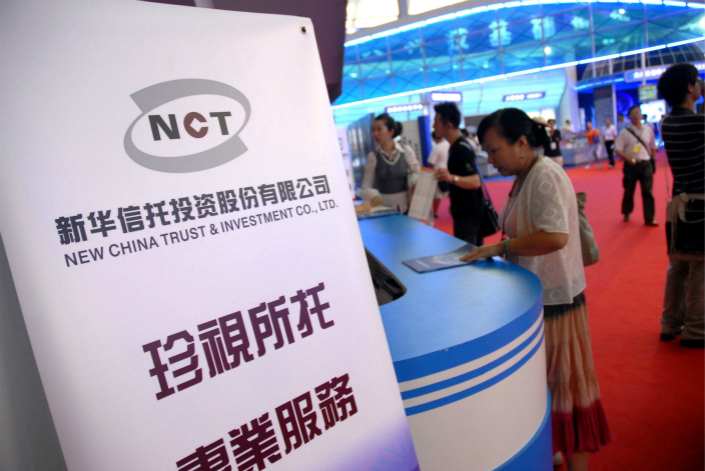 Conglomerate Tomorrow Holdings’ plan to sell its stake in New China Trust could face problems due to the recent financial difficulties of the potential buyer. Photo: VCG

(Beijing) — Controversial financial conglomerate Tomorrow Holdings Group has agreed to sell most of its stake in New China Trust Co., quickening the pace of a cash-raising fire sale of its assets as China cracks down on a group of freewheeling private financial firms, Caixin has learned.

But even that sale, which values New China Trust at 22 billion yuan ($3.44 billion), could be running into trouble due to recent financial difficulties at the potential buyer, a unit of the central government-owned tourism conglomerate CYTS Group, sources told Caixin.

The planned sale is the just latest in a multibillion-dollar selling spree by many similarly opaque conglomerates that built empires through major acquisitions over the last decade as China’s economy boomed. Now that group is getting hit by a major cleanup campaign led by Beijing, which is trying to reduce financial risk.

Other companies caught up in the campaign include formerly highflying airline-to-finance conglomerate HNA Group, real estate and entertainment giant Wanda Group, and CEFC China Energy, the private oil behemoth whose chairman has come under scrutiny.

Like those companies, Tomorrow has been offloading assets since its 47-year-old boss, Xiao Jianhua, was reportedly assisting authorities with unspecified investigations in January 2017. In April, an open filing showed the group made an urgent agreement to sell all of its shares in Guangdong-based Lianxun Securities Co. Just three months earlier it agreed to sell a substantial stake in Hong-Kong listed Hengtou Securities Co. for 9 billion yuan.

The company’s latest asset sale would see it sell the 94.43% of New China Trust held by five of its subsidiaries to a unit of CYTS Group. The remaining 5.57% would remain in the hands of London-based Barclays Bank, which became the first foreign bank to invest in a Chinese trust firm with its original purchase in 2007.

Despite its breakneck campaign to sell assets, Tomorrow has found it difficult to actually close some of its deals, including this latest one. Caixin has learned that even though New China Trust was valued at 22 billion yuan in the agreement, some say that figure could be high compared with the trust’s actual worth. The big price tag could also be tough for CYTS to finance.

Established in 1998 in the southwestern city of Chongqing, New China Trust was ranked near the bottom of the nation’s major licensed trust firms last year, at 66th out of 68, according to the China Securities Regulatory Commission. It posted a net profit of 109 million yuan last year, compared with 3.9 billion yuan by industry leader Ping An Trust Co.

New China Trust relied heavily on channeling to earn money before 2014, a popular business in which it moved money from property companies into risky investments in exchange for transaction fees. Such behavior was banned a few years ago, dealing a major blow to New China Trust over the last four years.

At the same time, the finances of New China Trust’s potential buyer China CYTS Industrial are shaky, after one of CYTS Industrial’s units recently failed to repay investors, banks and insurance companies for several trust products and loans.

Sources told Caixin that Tomorrow Holdings or one of its related companies might ultimately have to provide some of the funds for CYTS Industrial’s purchase of New China Trust. CYTS Industrial is currently in talks to potentially complete the deal by borrowing 7 billion yuan from Tianan Property Insurance Co., an insurance arm of Tomorrow Holdings, one source said. But that kind of financing could run afoul of tougher new regulations put out last month, analysts say.

Failure to close a sale of New China Trust would become just the latest of Tomorrow’s sales to hit headwinds. Caixin has learned that several of its previous agreements have also ground to a halt due to the large sums of money involved and the required regulatory checks.