Companies Backed by Tycoon and Under Investigation to Unload More Assets 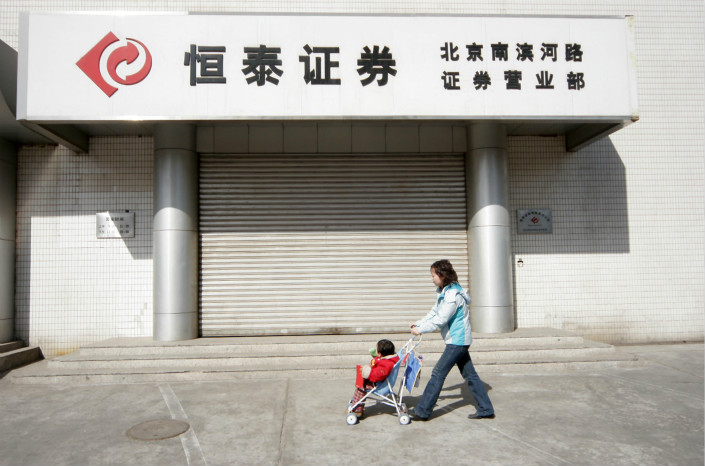 Hong Kong-listed Hengtou Securities Co. said that nine of its shareholders have agreed to sell their combined 29.9% stake to Citic Guoan Group, an affiliate of state-owned Citic Group. On the Chinese mainland, Hengtou Securities is known as Hengtai Securities (above). Photo: Visual China

A group of companies controlled by tycoon Xiao Jianhua, the founder of conglomerate Tomorrow Holding Group, has agreed to sell a substantial stake in Hong-Kong listed Hengtou Securities Co. for 9 billion yuan ($1.38 billion).

Xiao, who has been assisting authorities with unspecified investigations since January and whose whereabouts have been unconfirmed since then, has been shedding assets.

Hengtou Securities said in a statement Tuesday that nine of its shareholders have agreed to sell their combined 29.9% stake to Citic Guoan Group, an affiliate of state-owned Citic Group. These nine shareholders are shell companies controlled by Xiao’s Tomorrow Holding Group, Caixin has learned.

The deal will require approval from the China Securities Regulatory Commission (CSRC). Should it go through, Citic Guoan will be Hengtou Securities’ largest shareholder, the brokerage’s statement said.

In November, midsize Huaxia Life Insurance, also controlled by Xiao, agreed to sell a stake of up to 25% to a Guizhou-based property and financial company for up to 31 billion yuan.

Some employees of Hengtou Securities are anxious about the share sale because as the company’s largest shareholder would change from a private company to a state-owned one, Caixin has learned. The employees are concerned about whether previous incentive mechanism could still be upheld.

Hengtou Securities ranked 19th out of 97 peers in terms of revenues in 2016, according to an annual assessment by the CSRC. The brokerage earned 393 million yuan of profit in the first half of 2017, up 72.4% from a year ago.

Xiao was ranked on the Hurun Chinese rich list in 2016 as the 32nd-wealthiest person in China with a net worth of $6 billion.