By Wang Jing and Lin Jinbing 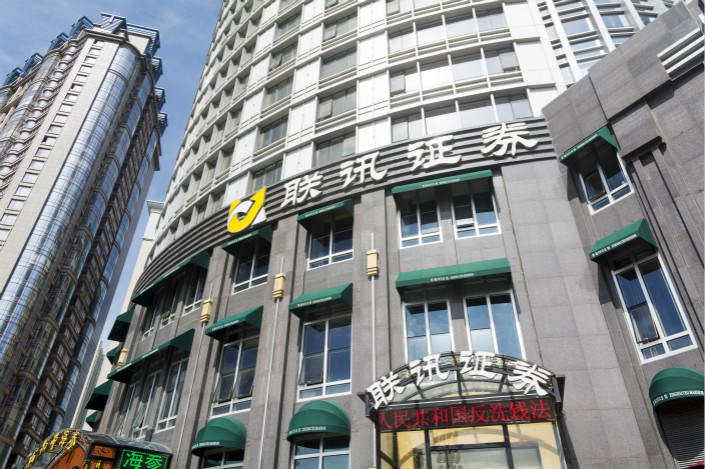 A company controlled by Tomorrow Holdings Group, one of China’s most mysterious conglomerates, has agreed to sell all of its shares in Guangdong-based Lianxun Securities Co. Ltd. as China strengthens its scrutiny of a group of opaque private financial firms.

The move comes amid a broader sell-off of assets by a larger group of aggressive Chinese conglomerates who have come under recent government scrutiny for their global purchases. Among that group, others who have been recently selling or trying to sell off assets include HNA Group, Wanda Group and CEFC China Energy.

The deal, which has yet to be sealed, is the latest move by companies affiliated with Tomorrow Holdings to unload assets since its 47-year-old boss Xiao Jianhua, one of the richest businesspeople in China, began assisting authorities with unspecified investigations in January 2017.

The Chinese government has determined that Tomorrow Holdings, which owns stakes in a number of financial institutions and listed firms through numerous shell companies, poses a large risk to the country’s financial security. The government prefers that state-owned enterprises buy assets being offloaded by the privately owned conglomerate, sources told Caixin.

Founded by Xiao in 1999, Tomorrow Holdings has expanded into a range of businesses that include real estate, insurance, securities and banking. In recent years, those affiliates have been involved in several high-profile acquisitions, including Thailand-based Charoen Pokphand Group Co. Ltd.’s purchase of a stake in Ping An Insurance Group in 2013. Some of the deals have been questioned for their frequent use of shell companies and structural complexity.

Founded in 1988, Lianxun has grown into a midsize player with a registered capital of 3.1 billion yuan and a market capitalization of nearly 6 billion yuan.

As the second largest shareholder of Lianxun, Kunshan Zhonglian Comprehensive Development Co. Ltd., an opaque affiliate of Tomorrow Holdings, has agreed to sell its 15.8% stake in Lianxun to Guangzhou Development Zone Financial Holding Group Co. Ltd. (GDZ Financial Holding), a state-owned enterprise based in Guangzhou, Guangdong province, according to Lianxun’s recent filing (link in Chinese) to the National Equities Exchange and Quotations (NEEQ).

NEEQ runs China’s over-the-counter stock-trading platform on which Lianxun was listed in 2014.

Uncertainties remain for the potential deal, both from the securities regulator and Lianxun’s board of directors.

Kunshan Zhonglian is restricted from selling 85% of its stake in Lianxun, according to the filing, so the transaction will require special approval from the securities regulator.

Based on Lianxun’s latest market capitalization, Kunshan Zhonglian’s stake in the small brokerage is worth around 900 million yuan ($143 million). However, Kunshan Zhonglian and GDZ Financial Holding did not determine a price under the framework agreement they reached earlier this month, the filing showed.

GDZ Financial Holding hopes to conduct due diligence before signing a formal contract with a negotiated transaction price, but Lianxun’s board wants the opposite, the filing showed.

In addition, Lianxun’s board has required that Kunshan Zhonglian and GDZ Financial Holding reach an agreement with Lianxun in advance about the scope of the due diligence for the deal. Otherwise, the company won’t cooperate, the board said in the filing.

Kunshan Zhonglian, founded in the eastern coastal province of Jiangsu in the early 1990s, became a shareholder of Lianxun at some point between 1999 and 2001. During that period, Beijing Lianzheng Information Technology Co. Ltd., which is controlled by the Stock Exchange Executive Council (SEEC), also became a shareholder of Lianxun, according to a Lianxun filing with the NEEQ from July 2014.

Caixin has learned that the SEEC, which played an active role in designing the country’s two major stock exchanges in Shanghai and Shenzhen, had a controlling stake in Lianxun by the end of 2001 through Beijing Lianzheng and several proxy shareholders.

According to public records, Lianxun’s shareholding structure stayed the same for the entire year of 2008. However, in the second half of that year, the SEEC sold part of its stake to Tomorrow Holdings affiliates through secret arrangements, separate sources told Caixin.

Then, in 2009, conglomerate HNA Group got in the mix. One of its subsidiaries, Haikou Meilan International Airport Co. Ltd., bought more than 22% of Lianxun that year.

By the end of 2017, HNA Group had amassed a 24.38% stake in the securities firm through three affiliates, making it Lianxun’s largest shareholder, according to the firm’s annual report.

Lianxun has maintained a stable management team for years despite the SEEC’s earlier divestiture. Some executives have served at the firm for more than 15 years, including two key figures on the board, five vice presidents, and an assistant to the president. These people are the ones who have a say in the company, people familiar with Lianxun told Caixin.

Board Chairman Xu Gang, 64, joined the company in 2000. Xu was invited to be a key member of the SEEC due to his work on acquiring the stake in Lianxun. Xu left the SEEC when it sold its stake in the securities firm without informing him in 2008. In his 30s, Xu once spent six years working for the ruling Communist Party’s United Front Work Department.

Li Yi, a board director and president of Lianxun, has been with the company since 2001. Li had worked for the Securities Trading Automated Quotations (STAQ) system, a nationwide stock-trading platform established by the SEEC, since 1993.

GDZ Financial Holding needs to talk with the management team if it hopes to make the deal without resistance. It had a 4.81% stake in Lianxun at the end of March. If the deal goes smoothly, it may acquire up to a 20.61% stake, becoming Lianxun’s second-largest shareholder after HNA Group.