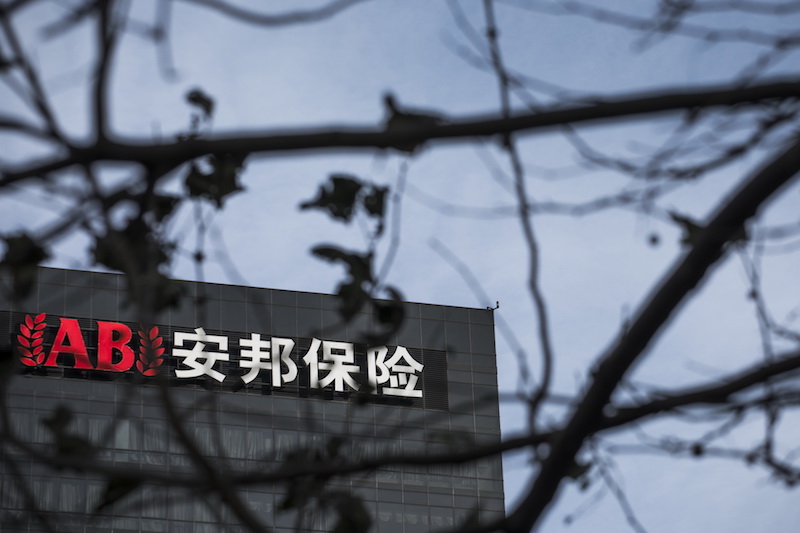 Anbang Insurance Group (above) is one of several financial holding companies targeted by regulators for debt-fueled investment. Photo: VCG

A policy document to regulate investments in financial institutions was approved at a Wednesday meeting in Beijing of top policymakers, chaired by President Xi Jinping.

Companies from different industries — from real estate to internet and e-commerce —have been keen to invest in the financial industry over the past several years to tap the massive market. Policymakers are concerned that freewheeling conglomerates formed by such investments have used financial institutions to get reckless loans that, gone bad, could threaten the overall financial system. Meanwhile, conglomerates and financial holding companies often hide behind opaque shareholder structures and business webs that make it difficult to pinpoint their operations.

Officials at the meeting vowed to strengthen scrutiny of financial institutions’ shareholding structure, the qualification of shareholders and their capital source, and the institutions’ corporate governance, investment activities and risk control capability.

The document, which hasn’t been released in detail, is part of much-awaited efforts pledged by regulators to put big financial firms and holding companies under proper oversight.

Huang Zhilong, director of macro economic research at Suning Institute of Finance, said financial holding companies should be more specifically classified based on the core business of the parent, such as financial services, traditional industries and the internet.

China’s 70 central government-owned enterprises owned more than 150 financial subsidiaries by the end of 2016, according to an estimation by Bai Hexiang, chief of the central bank’s Xi’an branch. Meanwhile, 28 private companies had each held stakes in more than five financial institutions.

A number of de-facto financial holding companies have flourished over the past years. Major players include state-owned firms such as China Citic Group and China Everbright Group, while private businesses including Ping An Insurance, Anbang Insurance Group and Tomorrow Holding Group.

Many different types of institutions with the characteristics of financial holding companies have emerged in China. But they have been something of a blind spot for regulators, Jin Penghui, the head of the People’s Bank of China’s Shanghai branch said earlier this month.

Some companies have used their expansive business reach to skirt regulatory oversight of individual sectors, structure their products to avoid industry regulations, transfer money between businesses to fund acquisitions in other companies, and sell innovative new products that could pose risks to the stability of the financial system.

Zhou Xiaochuan warned when he was still central bank governor last year that some companies made easy profits by investing in the financial sector and carrying out insider trading and related party transactions.

The rampant expansion of Anbang Insurance, which grew to be one of the country's biggest insurers in less than a decade, underscores the risks of lax oversight of such financial conglomerates. Anbang, which was closely-held by founder Wu Xiaohui through a complicated and opaque shareholding structure, owns major stakes in several commercial banks. The capital to fund Anbang’s aggressive investments was mainly raised from retail investors through short-term, high-yield insurance policies known as universal life insurance, which became targets of regulators' crackdown last year.

Last month, the insurance regulator took over Anbang, accusing it of violating laws and regulations that threatened its solvency, and is working to restructure the company and bring in new capital. This week, Wu admitted to being involved in a fundraising scheme that took in more than 723 billion yuan ($115.2 billion) from illicit insurance sales.

Another financial conglomerate that has fallen foul of regulators is Tomorrow Holding, which has stakes in six city commercial banks and a number of other financial institutions through various affiliated companies. Its founder, Xiao Jianhua, has been assisting authorities in unspecified investigations since January 2017, and his company has been selling off assets.

In January, the CBRC issued rules to tighten the grip on banks’ shareholding structure to curb financial risks caused by regulation-dodging major shareholders.