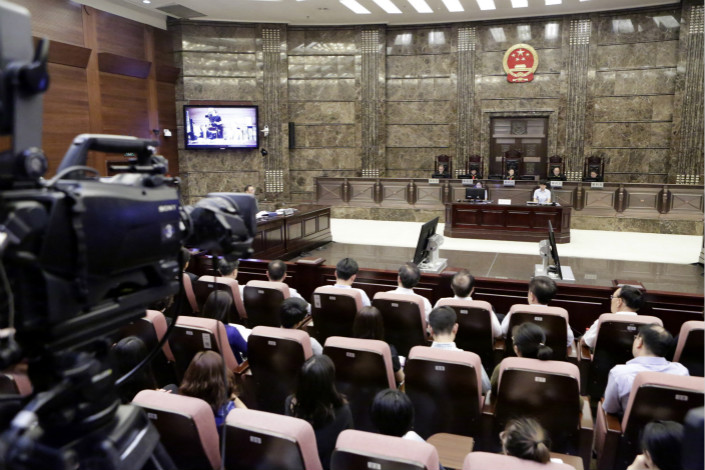 The establishment of a court in Shanghai to handle financial cases was approved Wednesday at a meeting of the Central Comprehensively Deepening Reforms Commission. Photo: VCG

The central government will set up a court in Shanghai to specifically handle financial cases as it seeks to plug the gap in the regulation of the fast-changing industry.

The creation of the specialized court aims to improve the expertise of the judges who handle financial lawsuits to help build a “fair, highly efficient and authoritative financial judicial system,” the official Xinhua News Agency reported, citing a government meeting chaired by President Xi Jinping on Wednesday.

It is part of the country’s drive to stave off financial risks and deepen reforms in the industry so it can better serve the economy, the report said.

The establishment of the finance court was approved at the meeting of the Central Comprehensively Deepening Reforms Commission, a policymaking and implementation body headed by Xi. The commission also passed rules increasing scrutiny on the country’s $15 trillion asset-management industry; directives to tighten oversight on investment in financial institutions by nonfinancial companies; and the further opening of the free-trade zones in the southern province of Guangdong, the eastern province of Fujian and the northern port city of Tianjin, the report said.

China has created specialized divisions for finance at some courts, with the first being set up in Shanghai’s Pudong New Area in November 2008. However, the country has never had a court that handles only financial cases.

The government has long been considering ways to beef up the judicial system’s capabilities to keep up with the financial industry’s rapid innovations, such as internet finance and the rise of “shadow banking” — whose activities are not reflected on the balance sheets of financial institutions and have escaped regulatory oversight.

“The development of the internet in recent years has had an immense impact on all industries in different ways, particularly the financial sector,” Li Aijun, head of the Internet Financial Law Research Institute at China University of Political Science and Law, told Caixin in a previous interview. “Along with specialized court divisions for finance, setting up a specialized financial court should be put on the (policymakers’) agenda … for the orderly development of the industry.”

Separately, financial disputes are expected to spike with tightening regulation of the sector, which requires more judges and lawyers to be trained to “identify the nature of financial innovations,” a legal expert in the banking industry, who declined to be named, had previously told Caixin.

China has made containing major risks, especially financial risks, one of its three top priorities for the next three years.

In another step to streamline and improve financial regulation, the central government combined the country’s banking regulator and insurance watchdog this month into a single agency. It also handed over the role of drafting key rules for prudential oversight of the two industries to the central bank.