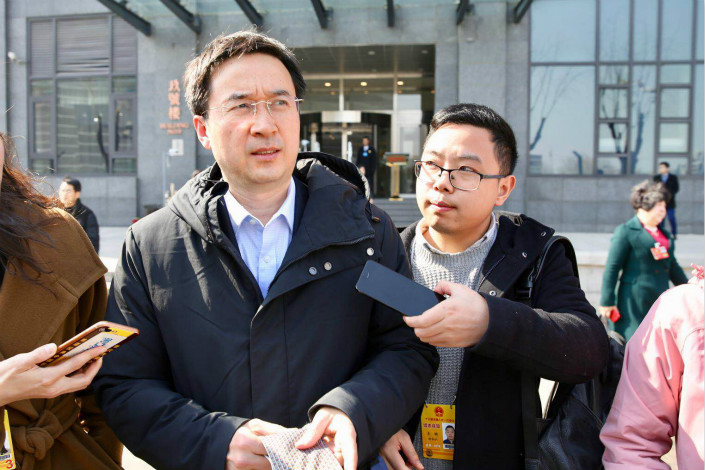 Jin Penghui, head of the People’s Bank of China’s Shanghai branch, said that many financial holding companies have had "no mechanism to isolate risks, were good at concealing risks and were constantly interfering in the operations of financial institutions." Photo: VCG

China needs to speed up efforts to tighten regulation of financial holding companies and make it clear who will take responsibility for overseeing these entities, a central bank official said during the country's annual “Two Sessions” legislative meetings.

Many different types of institutions with the characteristics of financial holding companies have emerged in China, but they have been something of a blind spot for regulators, Jin Penghui, the head of the People’s Bank of China’s Shanghai branch, said during a meeting of the economics group of the China People’s Political Consultative Conference, the legislature's advisory body, on Tuesday.

He proposed that in the short term, the new Financial Stability and Development Committee and the People’s Bank of China (PBOC) should take the lead in formulating regulations. In the long term, he said, it must be made clear which agency will hold the main responsibility for oversight, and the State Council should promulgate regulations that bring financial holding companies into the overall supervisory framework.

Financial holdings companies and conglomerates, which engage in a range of banking and non-banking activities such as insurance and securities, have proliferated over the past few years and include state-owned firms such as China Citic Group and China Everbright Group, and private businesses including Ping An Insurance, Anbang Insurance Group and Tomorrow Group.

They flourished as the economy boomed and they took advantage of a regulatory vacuum that allowed them to play watchdogs off against each other, structure their activities to avoid the rules, transfer money between businesses to fund acquisitions in other companies, and sell innovative new products that could pose risks to the stability of the financial system.

But they came under increasing scrutiny as President Xi Jinping intensified his campaign to rein in financial risks. In his annual work report to the National People's Congress on Monday, Premier Li Keqiang highlighted shadow banking, internet finance, and financial holding companies as areas that require stronger coordination in financial regulation.

The problems now engulfing Anbang Insurance, which expanded rapidly to become one of the country's biggest insurance companies, underscore the risks posed by a lax regulatory environment. The China Insurance Regulatory Commission announced last month that it had taken over the troubled group because it had violated laws and regulations that threatened its solvency and was working to restructure the company and bring in new capital. Anbang's founder, Wu Xiaohui, is being prosecuted for economic crimes.

Tomorrow Holdings Group is another aggressive company that built up a web of holdings in other financial companies and has now fallen foul of regulators. Its controller, Xiao Jianhua, has been assisting the authorities in unspecified investigations since January 2017 and his company has been selling off assets.