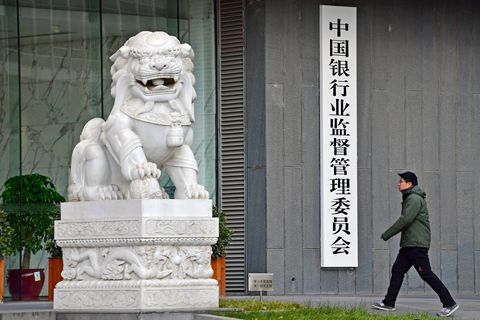 “The banking sector and regulatory departments must keep a clear mind and should not be blindly optimistic… and realize that the risks and challenges facing the banking sector are still severe and complicated,” the China Banking Regulatory Commission said in a statement Friday after a two-day meeting to set policy goals for the year.

High on the regulator’s agenda is coming up with rules to supervise fast-expanding financial-holding groups.

These companies emerged in China in recent years to offer a wide range of financial services through subsidiaries. Major players include both private players, such as Tomorrow Holdings Group and Anbang Insurance Group, and state-owned groups, such as China Citic Group and China Everbright Group.

Regulators grew alarmed last year over these companies alleged use of complicated ownership structures to aid connected-party transactions — in which connected persons or third parties may benefit through their interests in the entities involved in the transactions. Regulators were also concerned about highly-leveraged investments through the non-bank shadow banking system. Meanwhile, some in the sector were also accused of taking advantage of regulatory vacuums to conduct risky business.

One of the financial-holding groups in the spotlight is Tomorrow Holdings, controlled by tycoon Xiao Jianhua. The billionaire was seen last January being escorted in a wheelchair out of the Four Seasons Hotel in Hong Kong, according to media reports, and is believed to be assisting mainland authorities with unspecified investigations.

Tomorrow Holdings controlled at least nine listed companies, and controlled or owned shares in 30 financial institutions including banks, securities firms, trust companies and insurance firms, business registration documents show. Sources close to the matter told Caixin that Tomorrow Holdings has been seeking to offload some of its financial assets amid tightening regulatory scrutiny.

Anbang Insurance, which controls Minsheng Bank and Chengdu Rural Commercial Bank, has also become a target of regulators. In May, Anbang’s life-insurance unit was banned from selling some products for three months that violated industry rules. The CBRC also ordered commercial banks to assess their exposure to Anbang and several other companies with significant overseas merger and acquisition activity.

Amid tightening regulations, some financial institutions may encounter capital challenges and default risks. The CBRC will closely monitor institutions with high risks and work out solutions to deal with the risks in an orderly way, the banking regulator said in its Friday statement.

The commission also highlighted efforts to continue reducing the economy’s leverage, especially in the property sector.

The CBRC said it will work to rein in household credit risks, such as credit-card fraud, risky borrowing of consumers loans and violations in mortgage loans. The commission will also closely scrutinize irregular fundraising activities in the property sector.

According to a report by TF Securities, the overall leverage ratio of Chinese residents has increased from 11% in 2006 to 45% in 2016. In 2016, Chinese homebuyers’ average loan-to-value (LTV) ratio — which measures the leverage of asset purchase — of reached 50%. When the U.S. subprime mortgage crisis broke out in 2007, the LTV ratio approached 60%.

A report by the Chinese Academy of Social Sciences warned that the leverage ratio of Chinese households has been rising. Some borrowers have used short-term consumer loans to finance mortgage payments after regulators tightened mortgage lending rules early last year to cool market speculations, it said.

Since the beginning of this year, the banking regulator has fortified its efforts to curb the buildup of bubbles in the real estate market. On Jan. 13, the commission issued a notice to crack down on violations in lending to the property sector, including household mortgage loans.

Excessive leverage of property developers is also under scrutiny as regulators step up supervision of the shadow-banking sector, which has provided capital sources to developers.

China’s battle against the rampant shadow-banking business will continue to deepen this year, according to the CBRC statement. In 2017, top financial regulators moved aggressively to curb financial institutions’ off-balance sheet business, which has largely fallen outside oversight. That includes a sweeping rule proposed in November to regulate all types of asset management products and a crackdown on entrusted loans.

A year of effort has yielded positive changes wanted by regulators. According to the CBRC, although commercial banks’ off-balance sheet wealth-management business continued growing in 2017, it grew by a smaller monetary amount that it had in the previous year — about 5 trillion yuan less in 2017 — amid tightening regulations.

Banks’ off-balance sheet investments through channels like asset-management products offered by trust and securities firms and privately offered asset-backed securities also saw growth last year, but the amount of the year-on-year increase was 10 trillion yuan less in 2017 than in the previous year, the regulator said. Regulators have blamed such channels for directing capital to fund debt-ridden property sector, local governments and industries with overcapacity.

In 2017, the banking industry saw its first contraction of assets in the interbank market since 2010, with a decline of 3.4 trillion yuan from the end of 2016. The interbank market has become a main source of short-term funding for banks and nonbank financial institutions that borrow money to invest in higher-yielding assets.

The CBRC said Friday that it will continue to press banks to improve their asset quality and will put both the on-balance sheet and off-balance sheet business under proper oversight.

The commission will “firmly stop the chaos and heal the lingering illness” of the banking sector, said the statement, citing Chairman Guo.