By Liu Xiao and Yang Qiaoling 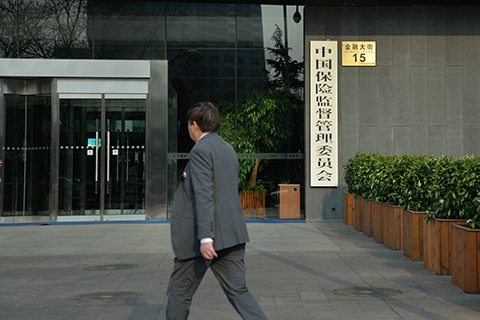 The China Insurance Regulatory Commission (headquarters pictured) said China's insurance sector reported revenue from premiums paid by customers on new and existing insurance policies rose 18.2% in 2017 to 3.66 trillion yuan ($571.5 billion), down from a growth rate of 27.5% in 2016. Photo: Ma Minhui/Caixin

China’s insurance companies saw growth in their combined premium income slump by a third last year amid a regulatory campaign to rein in financial risk that included a crackdown on the sale of risky products.

The industry reported revenue from premiums paid by customers on new and existing insurance policies rose 18.2% in 2017 to 3.66 trillion yuan ($571.5 billion), down from a growth rate of 27.5% in 2016, according to figures released by the China Insurance Regulatory Commission (CIRC) on Monday. Sales of controversial universal life insurance policies fell by 50.3% to 636.3 billion yuan, the data show, after the commission banned some companies from selling the short-term high-yield products because of concerns they were being used to finance long-term risky investments.

Combined profits jumped an estimated 29.7% to 256.7 billion yuan in 2017, the CIRC said. The commission has not disclosed full-year figures for 2016, but previously released data show that in the first nine months of 2016, profits fell by an estimated 35.7% year-on-year to 157 billion yuan. The insurance industry’s comprehensive solvency ratio — a measure of its ability to pay claims — was 252% in 2017, an improvement from the 238% reported in the first quarter.

The increase in profits was due mainly to strong returns on investment, Duan Haizhou, deputy head of the CIRC statistics department said at a briefing on Monday. Insurers’ return on investment jumped 18.1% to 835.2 billion yuan in 2017. The overall yield on investments was 5.77% last year, an increase of 0.11 percentage points on 2016.

Last year, the CIRC intensified a crackdown on the insurance industry that began in 2016, part of a regulatory storm that swept the financial industry amid concerns that institutions were engaged in risky and irregular activities that could endanger the stability of the financial system. Insurers had benefitted for years from lax supervision by the commission under Xiang Junbo, a colorful character who headed the watchdog for almost six years, but was put under investigation by the Communist Party’s anti-graft watchdog in mid-April 2017.

Chen Wenhui, who now runs the commission, warned insurance companies back in December 2016 that they needed to go “back to basics” and return to their fundamental mission of being “cautious and prudent” investors.

Last week, the CIRC announced a three-year plan to eliminate the main sources of risk in the industry, including share ownership, sources of capital and use of funds. The regulator will undertake targeted inspections and increase consumer rights protection, commission spokesman Zhang Zhongning said at Monday’s briefing. The backgrounds of shareholders will be scrutinized along with related parties and transfers of shareholder rights.

As part of the plan, the CIRC published a list of the major sources of risk and named the departments and agencies responsible for taking the lead on tackling each one. These agencies are required to draft a strategy with a timetable, a list of priorities and the names those responsible for dealing with each aspect of the strategy.