By Aries Poon and Wu Hongyuran 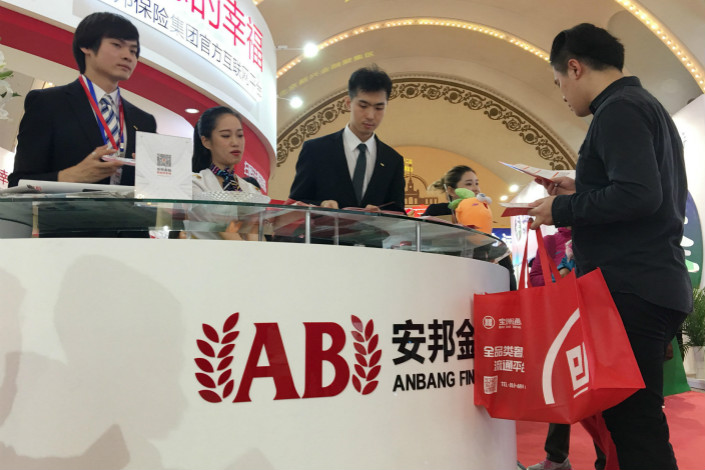 Anbang Insurance Group Co.'s recent regulatory filings to the Shanghai and Hong Kong bourses show that it has substantially reduced its stake in four Chinese banks. Above, Anbang hosts an exhibition booth at the Beijing International Finance Expo in October. Photo: Visual China

Anbang Insurance Group Co. and its units had reportedly trimmed their stakes in some leading Chinese banks during the second quarter, as premium income plunged and most funding taps were turned off amid the Chinese government clampdown on opaque and acquisitive insurers.

The private insurer is one of several Chinese companies facing heightened government scrutiny after binging on acquisitions overseas and selling high-risk financial products. Subsidiary Anbang Life Insurance was suspended from offering new insurance products for three months earlier this year. It was also ordered to stop selling universal insurance policies and some of its annuity contracts, which significantly hit revenues.

Based on banks’ semiannual regulatory filings to the Shanghai and Hong Kong stock exchanges on Wednesday related to the second quarter that ended June 30, Anbang and its units dropped off the list of 10 largest shareholders at Industrial & Commercial Bank of China (ICBC), China Construction Bank (CCB) and Agricultural Bank of China (ABC).

Anbang couldn’t be reached for comment for information beyond the banks’ reports.

At CCB, Anbang held 131.2 million A-shares, or a 0.05% stake, through its wholly owned Hexie Health Insurance Co. as of the end of March. It was the 10th-largest shareholder back then.

The insurer held 881.3 million ABC A-shares, or a 0.27% stake, also through the so-called conservative investment portfolio as of the end of March. It was the eighth-largest shareholder during the first quarter.

It is not known if Anbang had sold down part or all of its stake in those lenders.

The latest filings show that at BOC, Anbang sold 327.2 million A-shares during the second quarter. As of the end of June, the insurer held 357.8 million BOC A-shares through two insurance products, with its stake dropped to 0.12% from 0.23%.

Anbang held 5.68 billion shares of Minsheng Bank and 2.70 billion shares at China Merchants bank as of the end of June, unchanged from the first quarter, the filings show.