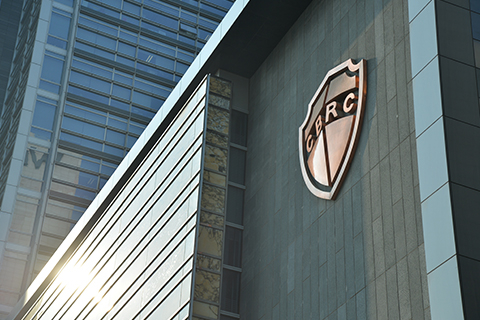 One of the eight key regulatory tasks of the China Banking Regulatory Commission this year is to continue its crackdown on banking activities that run contrary to the country's macroeconomic policies. Photo: Ma Minhui/Caixin

The country’s banking regulator has indicated that it will continue to subject banks to high levels of scrutiny over funds they provide to the real estate sector.

Caixin learned from the China Banking Regulatory Commission (CBRC) that one of the eight key missions that regulators have set for 2018 is to reverse economic activity that conflicts with central government macroeconomic directives. This includes the extent to which banks funnel money into the real estate sector, especially via irregular financing.

At China’s annual Central Economic Work Conference, which concluded on Dec. 20, the central government vowed to improve long-term mechanisms to ensure the stable and healthy development of the real estate market, and reiterated that both home purchases and rentals will be encouraged. This was interpreted by the market as meaning that the regulator will not relax its grip on funding that flows into the real estate sector.

Overseeing real estate, an important part of the national economy, has been a key part of Beijing’s macroeconomic policies for years. In 2017, after the central government’s call for homes to be used as residences rather than speculative investments, many city governments wheeled out a flurry of restrictions to subdue property transactions in a bid to stall price growth.

CBRC Chairman Guo Shuqing said in the first quarter of 2017 that loans related to real estate, including loans in which property is collateral, accounted for more than a third of the banking sectors’ 110 trillion yuan ($16.9 trillion) in loans, and up to 50% at some banks, piling up potential risks.

The aforementioned loans refer only to loans reflected on banks’ balance sheets, while loans extended by banks via irregular channels — such as trust and entrust funds or asset management plans — are hard to estimate.

A report by China International Capital Corp., a state-owned investment bank, claimed that new trust loans and entrusted loans in September totaled about 320 billion yuan, with a major chunk of this money flocking into real estate sector.

As a result, the CBRC carried out inspections in 2017 that required banks to check if they wrongly provided loans to real estate developers in both direct and indirect ways. The CBRC subsequently determined that banks had circumvented regulation to invest in forbidden or restricted sectors such as stocks, equity and real estate firms.

Also in 2017, the CBRC fined institutions that participated in irregular lending to the real estate sector. A Shanghai branch of the Bank of Jiangsu was fined 4.8 million yuan in January that year by the local banking regulator for providing funding to a real estate firm to buy land. This was the largest fine that the CBRC handed down that year.