Financial Risks at Some Banks Are ‘High and Rising’ 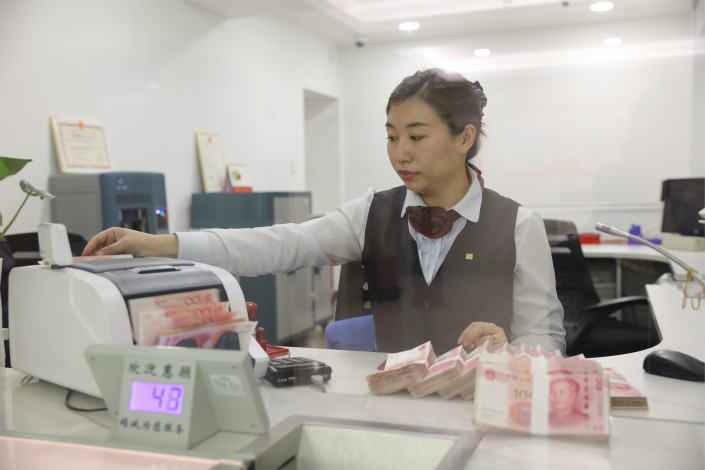 Financial risks in China mainly lie at banks, where the amount of financing accounts for more than 80% of the country’s total, an academic told Caixin. Photo: VCG

Financial risks at some Chinese banks are high and have continued to rise, even though the likelihood of a systemic crisis is declining, a government think tank said Wednesday.

The stronger than expected growth of China’s economy has led to an improvement in the quality of the country’s banking assets, which has in turn reduced overall risks, according to the report released by the National Institute of Financial Research (NIFR).

The institute was jointly set up by Tsinghua University, the research department of the People’s Bank of China, and the regulatory bodies overseeing the banking, securities and insurance industries.

China’s economy grew 6.9% last year, marking the first acceleration of expansion in seven years and beating the government's target as well as the forecasts of many economists.

Systemic problems occur when, for example, prices of all listed financial and property companies fall by more than 40%, said Zhou Hao, associate dean of the PBC School of Finance at Tsinghua University, which runs the NIFR.

Risks at large state-owned banks, and at securities and insurance companies, have declined steadily, but those at smaller lenders such as Beijing Bank, Ping An Bank, China Merchants Bank, and Shanghai Pudong Development Bank, remain high and are increasing, he said.

Financial risks in China mainly lie at banks, where the amount of financing accounts for more than 80% of the country’s total, Zhou said.

Risk in the sector, however, is concentrated at joint-stock lenders, due to the massive amount of wealth management products and asset management plans they offer, and because they are net borrowers in the interbank market, he said.

Large state-owned banks are in a better position than joint-stock lenders when liquidity in the market is tight and financial regulation tightens, because they can raise the interest rates they charge while lending to the smaller banks, he added.