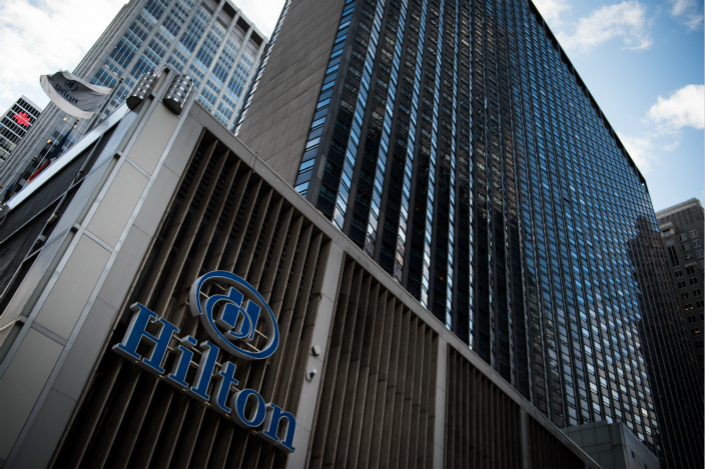 A Hilton hotel in New York's Midtown, pictured in October 2016. HNA Group's purchase of a stake in Hilton was one of the largest in its global spending spree. Photo: VCG

Debt-heavy HNA Group plans to sell down its stake in U.S. hotel giant Hilton Worldwide, closing the curtain on a $6.5 billion deal that made world headlines at the height of a global buying spree by the high-flying Chinese conglomerate.

HNA’s intent was disclosed in a filing by Hilton to the U.S. securities regulator on Thursday. The disclosure was the third in a series of similar announcements over the past month, as HNA decided to sell down its stake in three separate companies that it acquired as a result of its original purchase of 25% of Hilton in 2016.

HNA Tourism, which is 83% owned by HNA Group, currently holds 26.1% of Hilton Worldwide Holdings Inc., according to the filing. That stake is now worth about $6.6 billion, based on Hilton’s latest market capitalization.

“The reporting persons have determined to pursue a sale, through one or more registered public offerings, of some or all of the common stock that the reporting persons currently hold,” the statement said. “The exact timing, manner and terms of any such sale would be subject to market conditions and other considerations.”

The announcement is similar to two others made by Hilton affiliates that were spun off from the hotel company after HNA’s original purchase. The first of those saw Park Hotels & Resorts Inc. announce HNA Tourism would sell down its stake in the company, and the second saw a similar disclosure by Hilton’s timeshare affiliate Hilton Grand Vacations Inc.

The sales are the latest in an abrupt turnaround for HNA, which had been among a group of aggressive Chinese buyers of global assets. HNA’s purchases of the Hilton stake and high-tech parts distributor Ingram Micro for $6 billion marked two of the largest deals in that shopping spree.

Since then, Beijing has clamped down on overseas acquisitions by Chinese firms in areas including real estate, entertainment and travel, which it considers unnecessary and frivolous. It can take such actions by making it difficult for Chinese buyers to move their money out of the country to pay for such deals, and also through its strong influence over the country’s banking sector that is dominated by big state-owned lenders.

Besides the Hilton-related sales, HNA has also recently announced plans to sell its Avolon Aerospace Leasing Ltd. aircraft leasing unit for $884 million, and two real estate-related companies in its home province of Hainan for about $300 million.