How Alibaba Grew to Have More Revenue Than Some Countries 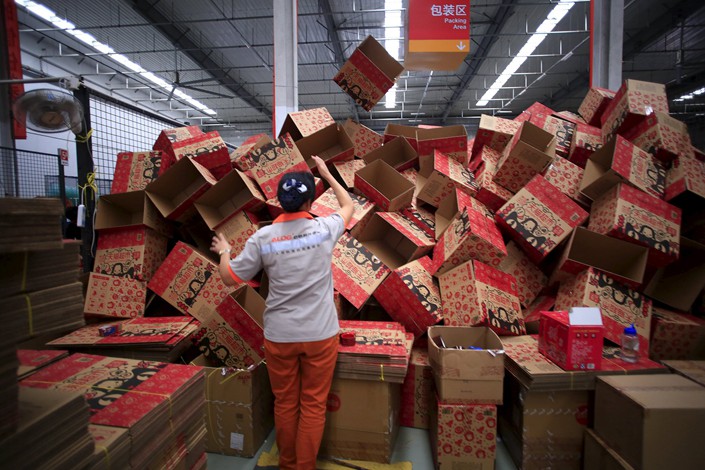 An employee works at a Tmall logistic center in Suzhou, Jiangsu province, in October 2015. Photo: VCG

When Jack Ma steps aside as Alibaba Group Holding Ltd.’s CEO in a year’s time he will leave the helm of what is likely China’s most admired private company, with operations spanning the e-commerce, finance, logistics, cloud computing and entertainment markets.

The company generated revenues of $39.9 billion in the 12 months up to March 31 according to its last annual report, roughly the equivalent of Ghana’s entire gross domestic product last year. This marks substantial progress for a company launched just 19 years ago from Jack Ma’s small apartment in Hangzhou, where he and 17 others pooled $60,000 together to build a platform connecting small Chinese firms with businesses abroad.

Alibaba’s potential to harness the rise of the internet to link relatively low-cost producers at home with companies in foreign markets was soon recognized by Goldman Sachs, which helped it to raise $5 million of funding in 1999, the year of its founding. This was followed in 2000 by an additional $20 million raised from a group of investors led by Japan’s SoftBank Group Corp., whose boss Masayoshi Son would develop a reputation for his ability to pick future champions of the tech world.

Largely at Ma’s insistence, Alibaba was emboldened to move beyond its core business in 2003 and launch online bidding platform Taobao, a direct competitor to then-market leader eBay, entering into a fierce war for market share in which Taobao’s (initial) lack of service fees undermined eBay’s entrenched position. Alibaba’s ultimate victory came from its development of Alipay, an online payment platform that took upon itself the burden of risk that payment would be honored between buyers and sellers of products, at a time when there was a deficit of trust in internet transactions. This swung consumers decisively in Taobao’s favor.

Alibaba received a major boost when U.S. giant Yahoo invested $1 billion in 2005 and gave it access to its search technology in exchange for a 40% stake. After a productive four years, relations soured when Yahoo CEO Jerry Yang resigned and mistrust between the partners began to grow. Between 2009 and 2011 Ma transferred ownership of Alipay from Alibaba into a private company under his control, a move Yahoo claimed it had not sanctioned and had only learned about when it was a fait accompli.

While controversy over Alipay persisted, in 2014 Ma rose to international prominence when Alibaba Group broke the record for the world’s biggest initial public offering, raising $25 billion on the New York Stock Exchange. The company has also embarked on several other forays abroad, such as with retail e-commerce platform Lazada in Southeast Asia, and AliExpress, which, although based in China, aims to sell to international buyers in the U.S, Russia and other markets.

Domestic e-commerce nevertheless continues to provide the lion’s share of Alibaba’s revenue, accounting for 71% according to its 2018 annual results, with international sales making up 6% of its total revenue. The company is also developing its cloud computing and digital media segments. Although these counted for just 5% and 8% Alibaba’s total revenues respectively in the year ending March 2018, both are major growth areas, with cloud computing revenue rising 93% year-on-year according to the company’s second quarter results. The house that Jack Ma built appears well-placed to continue expanding when its founder retires next year, when he will be replaced by Alibaba’s current CEO.