Jack Ma Made Himself China’s Richest Man. Now He Wants to Be a Teacher 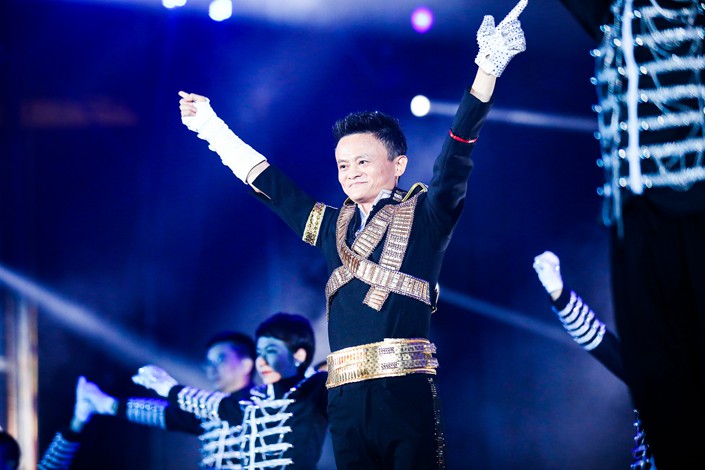 * Ma sums up retirement plans by saying, “I want to try new things”

(Beijing) — Alibaba’s Jack Ma is a man of many talents.

He used to be an English teacher. Even though he has no technical background, he managed to found China’s largest e-commerce company. He has practiced tai chi for more than 30 years. And he hasn’t been shy about donning wigs and elaborate costumes to perform at company events.

He is also a movie star, of sorts. Late last year, it caused something of a stir when Ma starred alongside superstar Jet Li in a short kung-fu flick, in which China’s richest man beat up Li and several other action movie legends, including Donnie Yen and Sammo Hung Kam-bo from Hong Kong, as well as Tony Jaa from Thailand.

So, it’s no surprise that Ma said he will pursue other interests after he retires from Alibaba next year — an announcement that took over social media during the weekend and grabbed international headlines.

Ma, who turned 54 on Monday, is one of China’s richest people, with a net worth of $36.6 billion, according to Forbes. He is seen as an icon of self-made wealth, and has a large following in China, including some people in remote villages. In these places, where Alibaba Group Holding Ltd.’s e-commerce platform, Taobao.com, is a major source of income, people worship Ma as a “god of fortune.”

But in Ma’s views, Alibaba has never been about him.

“Alibaba was never about Jack Ma, but Jack Ma will forever belong to Alibaba,” Ma wrote in an open letter released on Monday.

After his retirement next September, Ma wants to return to education, which excites him because it is what he loves to do.

Born in Hangzhou, in East China’s Zhejiang province, Ma began studying English at a young age, often conversing with English speakers at a hotel near his home. He later offered free guided tours to foreign visitors to practice the language. He reportedly failed the college’s entrance exam four times before enrolling at Hangzhou Teachers’ Institute, now known as Hangzhou Normal University. He graduated in 1988 with a degree in English.

After graduation, Ma applied for 30 positions, including with the police force and with fast-food chain KFC, and was rejected by all of them, according to media reports. He also applied 10 times to go to Harvard Business School, but was never accepted.

Ma eventually landed a job teaching English at the Hangzhou Institute of Electrical Engineering, where he worked for seven years before trying his hand as an entrepreneur.

In the mid-1990s, Ma learned about the existence of the internet while visiting the U.S. One of his friends in America showed him how to connect to a website, which led him to found China Pages, a company that created websites for small businesses around the country.

In 1999, Ma started Alibaba.com, a business-to-business marketplace backed by $60,000 from 18 co-founders, including his wife, Cathy, whom he met in college. By 2002, Alibaba.com had 1 million users, so Ma decided to replicate his success with a foray into the consumer sector, launching Taobao.com. He later created Alipay, Ali Mama and Lynx.

The rest is history.

In May 2013, Ma relinquished his role as Alibaba’s CEO. He plans to step down as chairman in September 2019, when the company turns 20 years old, and pass the reins to current CEO Daniel Zhang.

In previous interviews, Ma has said he would like return to teaching someday.

“Having been trained as a teacher, I feel extremely proud of what I have achieved,” Ma said in the open letter Monday. “Teachers always want their students to exceed them, so the responsible thing for me and the company to do is to let younger, more talented people take over in leadership roles so that they inherit our mission ‘to make it easy to do business anywhere.’”

Ma said he has many other dreams to pursue.

“Those who know me know that I do not like to sit idle. … The world is big, and I am still young, so I want to try new things,” he wrote. “What if there are other dreams that can come true?!”