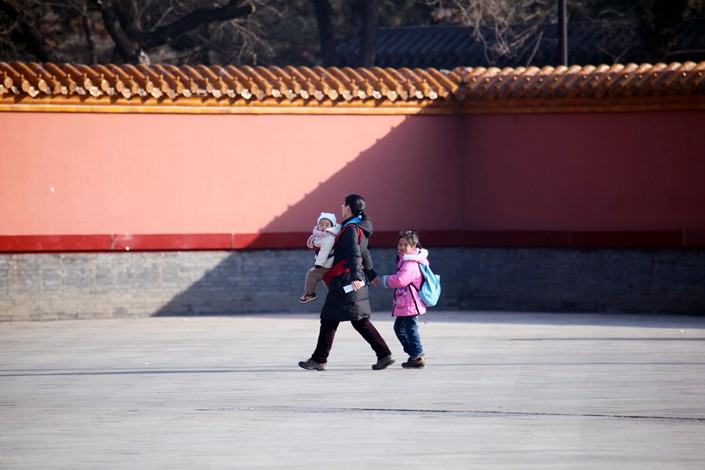 A mother takes her two children to a park in the northeastern city of Shenyang in February 2016. Photo: IC

China has scrapped several family planning government departments, fueling speculation that the country may be on the verge of ending its decades-old restrictions on family size.

The National Health Commission is replacing three offices that had “family planning” in their names with a new “population monitoring and family development” office, according to a plan announced on Sunday.

Chinese social media users immediately began predicting that the changes were a sign the government will abolish its existing two-child limit for married couples, and even switch soon to a policy of promoting multiple births.

China has had restrictions on family size in place for nearly four decades. From 1979 to 2015, each couple was allowed to have only one child, with some exemptions. In 2016, Beijing expanded the quota to two children, responding to fears that the one-child policy was causing China’s population to age too quickly.

Policymakers have previously said they had no plans to further ease family planning policies. But Sunday’s announcement is the latest of mounting signals that change is coming.

In March, Chinese Premier Li Keqiang failed to mention birth restrictions in an annual speech to the National People’s Congress, China’s legislature, for the third year a row. Then, in May, the unveiling of new postal stamp designs for the upcoming Year of the Pig showed a pig family with three piglets, which some saw as a sign that 2019 would usher in a “three-child policy.”

Then, in late August, the National People’s Congress quietly removed any mention of family planning from the marriage and adoption sections of the country’s new civil code, which will take effect in 2020.

The introduction of the looser two-child policy in 2016 boosted China’s birth rate slightly that year, but failed to create the baby boom policymakers had hoped for. Many couples do not wish to have second children for reasons as diverse as financial constraints and a lack of available caregivers, according to Yang Wenzhuang, a former department director at the National Health and Family Planning Commission, which was dissolved in March.

While population experts welcome the possible easing of China’s family planning policy, some people fear that couples, and women in particular, could now face greater government pressure to have more children.

“In the past, they used whatever methods they could to stop you from giving birth. In the future, they may use the same approach to make you give birth,” Weibo user ZhangyiranMOMO said.

Others recalled painful memories of the one-child policy. “How cruel the implementing of family planning was in Shandong when I was a child! When one relative gave birth to an extra child, all of my family’s possessions were taken away in a truck. Grandpa and Grandma were also detained,” another Weibo user wrote on Tuesday.