Couples Not Delivering on Beijing’s Push for Two Babies

By Ma Danmeng and Han Wei 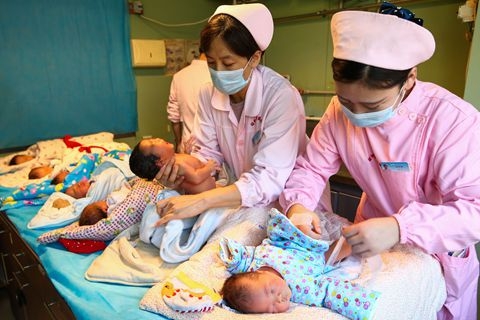 Experts are calling for tax breaks and other incentives to encourage couples to have a second child. Photo: Visual China

Dreams of a baby boom continue to evade Chinese officials.

Fewer babies were born in China in 2017 – 630,000 fewer – than the year before, despite Beijing having ended the decades-long policy restricting most couples to one child.

A mini baby boomlet was seen in 2016 when the new government policy took effect allowing Chinese couples to have two children. That year, 1.31 million more babies were born compared with 2015. But even with that rise, annual births reached 17.86 million, not the official prediction of 18 million newborns.

Experts are proposing incentives, such as tax breaks and subsidies, to encourage couples to have a second child. But with education and housing costs soaring in China, many couples — at least so far — aren’t embracing the idea of increasing their family size.

A total of 17.23 million babies were born in 2017, declining from 17.86 million in 2016, according to data released by China’s National Bureau of Statistics on Thursday.

That’s a disappointing figure for Chinese officials, who in 2015 decided to relax family planning rules and allow all couples to have two children. Family planning officials forecasted that the policy change could push annual new births up to 20 million. By 2030, China’s population was predicted to rise to 1.45 billion from today’s 1.39 billion, creating a stable workforce needed for economic growth.

But some experts say the population target will be difficult to reach unless the government completely abolishes the family-size control policy and allows couples to have more than two babies.

That the desired baby boom never materialized underscores concerns that the reform is unlikely to change the country’s graying and shrinking demographic picture.

In a commentary (Link in Chinese) published by Caixin, Liang Jianzhang, a professor at Peking University's Guanghua School of Management, and Huang Wenzheng, a demographer at Johns Hopkins University, said China is headed toward a population cliff at a faster pace than they had expected.

Liang and Huang previously estimated that China’s birth rate would start to sharply decline in 2018, with an annual drop of between 300,000 and 800,000 in the next 10 years. “The low fertility will be the biggest challenge to China in the next few decades,” they wrote.

The latest NBS data showed that China’s working age population, aged 16 to 59, totaled 902 million, or 64.8% of the total population. That is more than 5 million fewer in that age bracket than last year.

Three decades of family planning policies and lingering cultural preference for boys have also caused a widening gender gap in China. By the end of 2017, the country’s male population outnumbered female by a 32.7 million, according to the NBS.

In their commentary, Liang and Huang noted China’s declining fertility rate, partly due to the shrinking number of women of childbearing age — those between 22 to 30 years old. A national census done in 2010 indicated the number of women capable of having a baby would drop 40% by 2025.

In 2015, China recorded a total fertility rate — the number of children a woman would be expected to have if she lived to the end of her childbearing years — of just 1.05. That is the lowest fertility rate of any country in the world, data published in the China Statistical Yearbook 2016 showed.

Liang and Huang suggested that the government should offer tax incentives or direct subsidies to couples to encourage childbearing. They estimated that if the government offered 10,000 yuan per year to a family with a second child, through tax reduction or direct subsidy, it would cost about 1% of the national GDP — a reasonable figure to the authors.

Offering tax breaks to parents with a second child is a good strategy to encourage fertility and stimulate domestic consumption, Liang and Huang wrote.

China should take action to encourage births as soon as possible, otherwise the shrinking working age population will become the largest threat to the country’s development, they wrote.