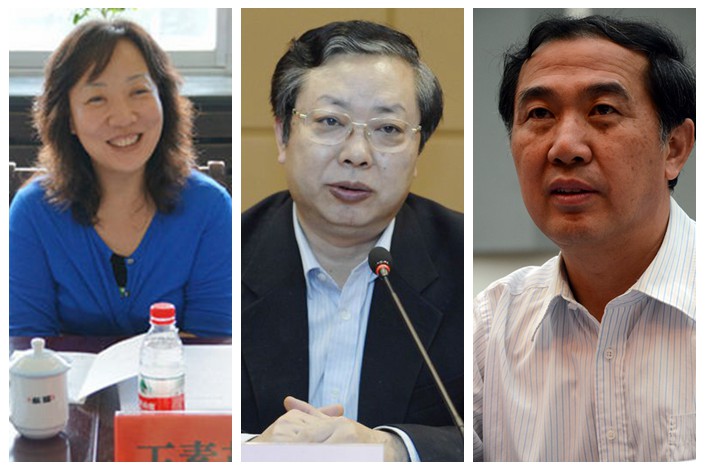 Wang Suying, left, the former director of the China Welfare Lottery Issuance and Management Center, is being investigated for alleged corruption. Her predecessors Chen Chuanshu, center, and Bao Xuequan, right, were also involved in similar cases.

* Now-retired former director of the China Welfare Lottery Issuance and Management Center is being investigated by discipline inspection and supervisory departments, according to a Wednesday announcement

(Beijing) — China is investigating a former top lottery official on allegations of corruption — the third misconduct case involving a lottery chief in just over a year, and the fifth such case to target an official in lottery corruption in two years.

Wang Suying, the former director of the China Welfare Lottery Issuance and Management Center, is being investigated by discipline inspection and supervisory departments, according to a Wednesday announcement by China’s Ministry of Civil Affairs, which runs the Welfare Lottery. There are two legal lotteries in China, both of which are run by the state — the other being the China Sports Lottery.

Wang worked at the Ministry of Civil Affairs for years before being appointed director of the center in 2015. She retired in May 2017.

The country has long struggled to contain corruption in its lottery system. A 2015 audit by the Chinese Academy of Social Sciences found that 16.9 billion yuan ($2.46 billion) of 65.8 billion yuan in lottery funds handled between 2012 and 2014 had been misappropriated. Proceeds from the lotteries are intended to flow into charitable funds, but the money had been used for other purposes, including property purchases and officials’ expense claims, the audit found.

Wang’s predecessor, Bao Xuequan, along with Bao’s former deputy, Wang Yunge, were kicked out of the Communist Party in August 2017 after an official corruption investigation found the pair guilty of abusing their positions for their own benefit, among other charges.

In July 2017, authorities said Chen Chuanshu, who left the lottery center in 2006 as its chief, would be demoted for serious neglect when he was at the center.

Before that in February 2017, former Civil Affairs Minister Li Liguo was also demoted for “serious oversight” for lottery corruption that took place at agencies under his supervision.

Despite the state-run lottery’s troubles, sales have continued to rise. September lottery sales were up 15.1% year-on-year, according to data from the Ministry of Finance. The welfare lottery authority reported 217 billion yuan in lottery sales in 2017, making 62 billion yuan for the country’s charitable causes, according to a statement by the lottery’s management center.