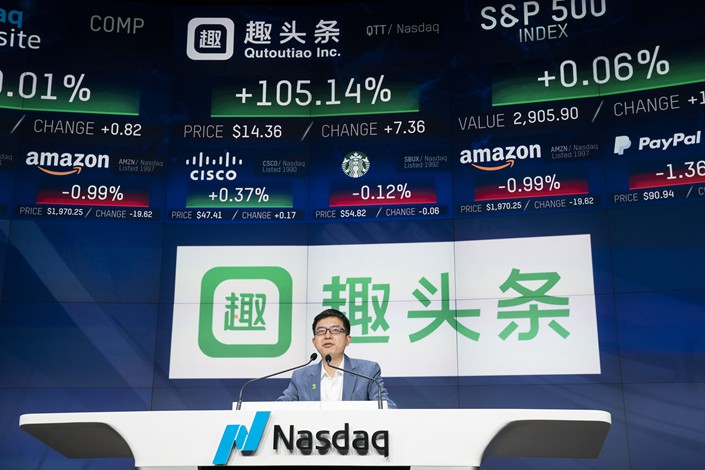 Eric Siliang Tan, chairman and CEO of Qutoutiao, speaks before ringing the closing bell at the Nasdaq MarketSite, on Sept. 14 in New York City. Photo: VCG

Shares in Chinese content and news aggregator Qutoutiao Inc. closed Friday at more than double their New York debut price, after the company cut the size of its initial offering size due to concerns about investors’ recent tepid response towards Chinese stocks.

Qutoutiao shares closed at $15.97 Friday, up 128% from their $7 initial offering price. The strong closing level came after the price had almost tripled earlier the day, with trading halted four times during early trading due to the stock’s surging price.

The company sold 12 million American depositary shares (ADS) to raise about $84 million, sharply lower than the $300 million it had originally targeted in its initial prospectus filed last month. The $7 initial offering price was at the bottom end of the company’s targeted price range of $7 to $9 per ADS.

“Even though overall market conditions in the U.S. are going up, Chinese-related stocks are going down, and actually, there has been large volatility,” said Yucheng Chen, Chief Strategy Officer of the company, in a phone interview with Caixin before the market opened on Friday.

Founded in June 2016, Shanghai-based Qutoutiao aggregates news and short videos from professional media and freelancers and then delivers the content — curated using artificial intelligence technology — to users. Qutoutiao said it now has an average of 17.1 million daily active users, mostly based in smaller Chinese cities, who spent an average of one hour each day on its mobile app. It is China’s third largest news platform trailing only Beijing ByteDance’s Jinri Toutiao and Tencent News, according to Chen.

The company’s success has also been due to its popular “user loyalty program,” where readers can earn points for every article they read or every new user they recruit to join the platform. The points can be redeemed for monetary rewards.

The massive subsidies it pays to attract more users – one of the company’s key operational costs – means it is still loss-making. In 2017, its net loss rose nearly 10 times to 94.8 million yuan ($13.8 million) on a revenue of 517.1 million yuan, according to its prospectus.

The company aims to be profitable by 2020. To achieve that goal, Qutoutiao plans roll out a series of measures, including persuading users to convert their “loyalty program” points into a membership instead of cashing out, Chen told Caixin.

Qutoutiao is the second Chinese company to list in the U.S. this week. On Thursday, Chinese electric carmaker Nio Inc. closed up nearly 76% on its second day of trading on the New York Stock Exchange, after a relatively modest gain of just 5% in its trading debut Wednesday.

On Friday, Nio closed down 15% at $9.90, during a volatile trading day that saw it rise as much as 19% and fall as much as 21%. The company's initial public offering price was just 1 U.S. cent above the bottom of its $6.25-to-$8.25 target price range amid a growing wave of investor skepticism over new listings by money-losing Chinese startups.