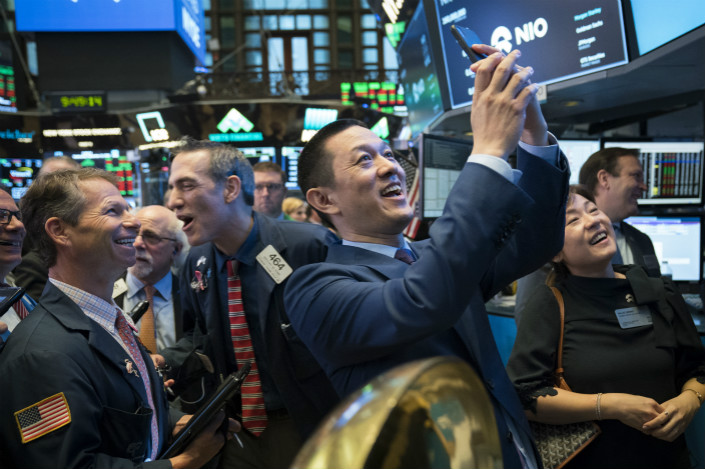 Shares of Chinese electric-car maker Nio Inc. jumped more than 5% in their U.S. trading debut on Wednesday, reversing a steady string of negative developments in its IPO including a pricing near the bottom its range.

After pricing at $6.26, Nio’s shares opened at $6 and dropped to a low of $5.35 before closing at $6.60 on its first day of trading on the New York Stock Exchange. That gave the company a market capitalization of about $6.8 billion.

The company raised $1 billion from its IPO, the third-largest offering in the U.S. by a Chinese firm this year, but well below its original fundraising target of up to $1.8 billion, which Nio revealed when it first filed its IPO prospectus last month.

The company’s IPO pricing on Tuesday was just 1 U.S. cent above the bottom of its $6.25-to-$8.25 target price range, amid a growing wave of investor skepticism over new listings by money-losing Chinese startups.

Nio has proclaimed its desire to be “China’s Tesla.” The company’s ES8 pure-electric, seven-seat SUV is seen as a rival to Tesla Inc.’s Model X, but is sold at half of the price of the Model X in China.

Shanghai-based Nio is one of many electric-vehicle (EV) makers in China that is trying to take advantage of Beijing’s strong push to move to low- and no-emissions vehicles.

Like Tesla and most EV-makers, Nio is still losing a lot of money, including net losses of 3.3 billion yuan ($480 million) in the first six months of this year and about 5 billion yuan for all of last year, according to its IPO prospectus.

Also, like Tesla, Nio has faced questions whether it will be able to meet its goal to deliver 10,000 vehicles by the end of the year.

Nio had to delay the late-May delivery of its first batch of 10 vehicles. As of August, the company had delivered 1,381 vehicles, but secured 15,761 reservations with user deposits, the prospectus showed. On average, each batch of vehicle deliveries has been delayed by about a month, according to company founder and CEO Li Bin.

Nio is expected to spend funds from the IPO on ramping up production of the ES8 and to fund the commercial rollout of a second model, a five-seat SUV aimed at a broader customer base, by the first half of 2019.

After the IPO, Li will still hold 14.5% of the company and have 48.3% voting power through his Class C shares.

Two of the company’s largest backers are Chinese internet giant Tencent Holdings Ltd. and local private equity fund Hillhouse Capital, which held 15.2% and 7.5% of Nio’s shares respectively before the listing, according to the IPO prospectus. It was not known if Tencent or Hillhouse subscribed to the IPO shares.