China’s Tesla-Wannabe Runs Out of Juice 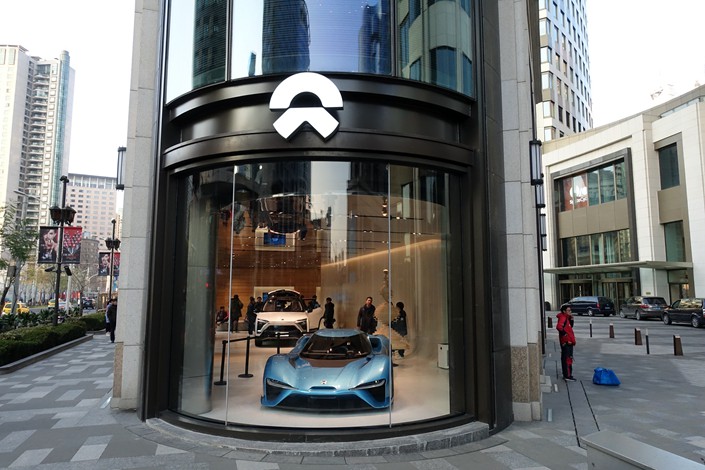 A Nio showroom in Shanghai on Jan. 16. Photo: IC

Electric-car maker Nio Inc. priced its New York initial public offering (IPO) shares just a penny above the bottom of their previously given range, amid a growing wave of investor skepticism over new listings by money-losing Chinese startups, a source familiar with the listing said.

The pricing at $6.26 per American depositary share (ADS) compares with the previously announced range of $6.25 to $8.25, said the source, speaking on condition of anonymity because the information is not yet public. At that price the company would raise about $1 billion, or well below its original fundraising target of up to $1.8 billion revealed when it filed its original IPO prospectus last month.

The top 10 subscribers for the listing accounted for nearly 90% of all orders, said the source, indicating the strongest interest was coming from very large investors. Two of the company’s largest backers are Chinese internet giant Tencent Holdings Ltd. and local private equity fund Hillhouse Capital, which held 15.2% and 7.5% of Nio’s shares before the listing, according to the prospectus. It was not known if either of those was among the top subscribers for the IPO shares.

The offering was well oversubscribed, the source added, declining to be more specific. The listing was underwritten by at least eight investment banks, including big names like Goldman Sachs, Morgan Stanley, JPMorgan and Citigroup, according to the original prospectus.

Nio, which has proclaimed its desire to follow in the footsteps of U.S. superstar Tesla, is one of many electric-vehicle (EV) makers in China that is trying to take advantage of Beijing’s strong push to move to low- and no-emissions vehicles. Beijing previously offered strong tax and other incentives to both buyers and developers of such cars, but has recently begun rolling many of those back after the initial campaign resulted in a flood of mediocre models using older technology into the market.

Like most EV-makers, Nio is still losing lots of money, including net losses of 3.3 billion yuan ($480 million) in the first six months of this year and about 5 billion yuan for all of last year, according to its original prospectus.

Nio is expected to spend funds from its offering on ramping up production of its first model, the ES8 — a seven-seat SUV — and to fund the commercial rollout of a second model, a five-seat SUV, by the first half of 2019. The Shanghai-based company was founded in November 2014 by auto industry veteran Li Bin, who previously founded U.S.-listed Bitauto Holdings Ltd., an auto-service website.

The listing is one of a growing number of money-losing Chinese companies to meet with tepid reception from overseas investors in both the U.S. and Hong Kong. Two money-losing drugmakers, BeiGene Ltd. and Ascletis Pharma Inc., have made new public listings in the last two months in Hong Kong, but both now trade below their IPO prices. Another money-loser, news aggregator Qutoutiao Inc., last week disclosed it was slashing the fundraising target of its original IPO plan by nearly half, as it prepares to debut its shares later this week.