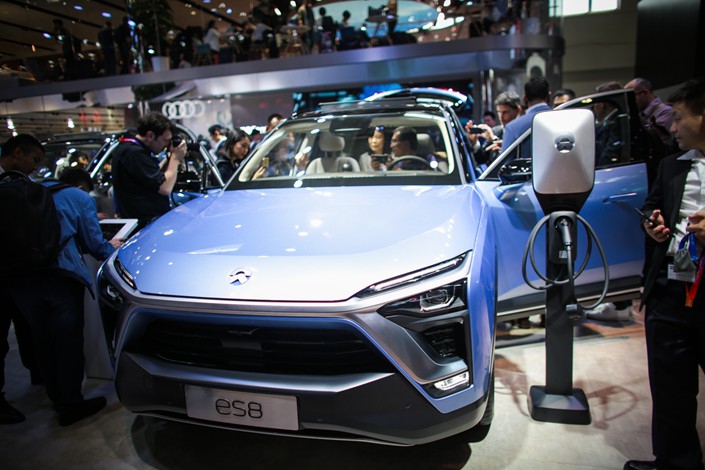 * Latest target of raising as much as $1.52 billion is down from an initial goal of up to $1.8 billion, the company said on Tuesday

* Company has faced questions about whether it will be able to meet its goal of fulfilling orders for 10,000 vehicles within the year

Nio’s latest target of raising as much as $1.52 billion is down from an initial goal of up to $1.8 billion, the company said in an updated filing to the U.S. securities regulator on Tuesday. It plans to issue about 160 million American depositary shares priced between $6.25 and $8.25, giving it a market value of up to $8.46 billion. It could sell another 24 million shares in an overallotment option if demand is strong.

Nio is currently losing money, reporting a loss of 5 billion yuan ($734 million) last year, double the loss from 2016. But it hopes to drive to profitability following the delivery of its first products in June. It aims to use the IPO proceeds to continue funding its operations as it moves toward its eventual goal of profitability.

The company’s IPO downsizing comes as many recently floated Chinese tech company stocks have come under pressure due to waning interest from Wall Street investors, especially companies not making money.

After initially soaring in their July trading debut on the Nasdaq, shares of money-losing group-buying discounter Pinduoduo Inc. fell below their IPO price earlier this month after large volumes of fake goods were discovered on its site. After listing in March, money-losing video-streaming site iQiyi Inc. saw its shares more than double in their first three months before giving back much of the gains since early June.

“I'm not surprised that Nio cut the size,” said an analyst who covers U.S.-listed China stocks, speaking on condition his name not be used because he doesn't follow the company. “Who wants to come to market now? It’s tough timing for money-losers.”

Shanghai-based Nio, whose Chinese name means “blue sky is coming,” has been among a group of Chinese startups that have expanded rapidly over the last few years, backed by millions of dollars in funding from private investors and tech companies. As of December, Nio had raised nearly of 13 billion yuan from investors including social media giant Tencent Holdings Ltd.

The company has faced questions (link in Chinese) about whether it will be able to meet its goal of fulfilling orders for 10,000 vehicles within the year. Its delivery of its first vehicle, the ES8, to consumers in late June was one month behind schedule, according to CEO and founder Li Bin.

As of Tuesday, Nio had delivered a total of 1,381 ES8s and secured another 15,761 reservations with user deposits, according to the prospectus.