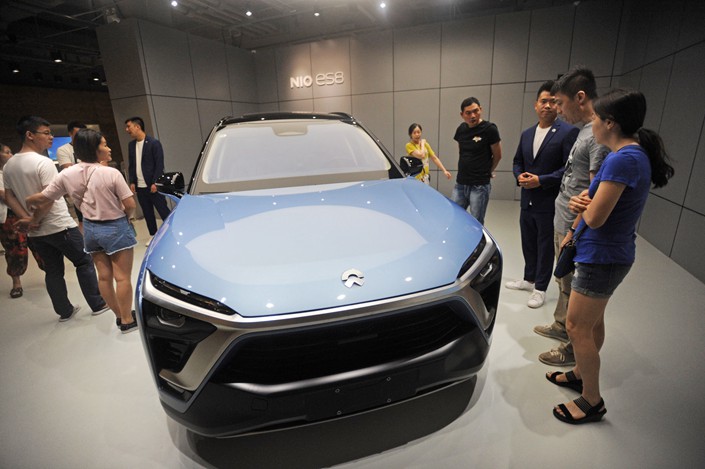 * Nio plans to use the funds for research and development, upgrading its manufacturing facilities and expanding its sales network

(Beijing) — While U.S. electric-vehicle pioneer Tesla Inc. is considering going private, a Chinese competitor is ready to face the challenges of being a public company as it prepares to tap the U.S. capital market.

Nio Inc., which has proclaimed its desire to be China’s Tesla, filed an initial public offering application with the Securities and Exchange Commission on Monday, becoming the first Chinese electric-car startup to tap the U.S. capital markets.

The company said it intends to raise as much as $1.8 billion, an amount equivalent to its planned capital expenditure over the next three years for research and development, upgrading its manufacturing facilities in Shanghai, and expanding its sales and service networks.

Its first-year expenditure will be $600 million, the filing said. Nio is expected to spend that on ramping up production of its first model, the ES8 — a seven-seat SUV — and fund the commercial rollout of a second model, a five-seat SUV, by the first half of 2019.

“The aggressive expansion means that continuing funding is necessary for Nio,” said columnist Qiu Kaijun, who runs an independent industry blog focusing on electric vehicles. “It has to turn to public capital as private investors have been reluctant to inject more money due to its high valuation.”

Nio’s plan to list in the U.S. comes one week after news broke that the money-losing Tesla might go private. In an email to employees last week, Tesla CEO Elon Musk cited various drawbacks to being a public company, such as the obligation to report earnings.

Shanghai-based Nio was founded in November 2014 by Li, an over-10-year veteran of the auto industry. He had founded the U.S.-listed Bitauto Holdings Ltd., an auto-service website.

In 2017, Nio’s net loss doubled to 5 billion yuan. It only started to generate revenue earlier this year when it began to deliver the ES8, which it launched in December at half the sticker price of Tesla’s Model X.

The startup has faced questions whether it will be able to meet its goal to fulfill orders for 10,000 vehicles by the end of the year (link in Chinese). Nio had to delay the late-May delivery of its first batch of 10 vehicles. As of the end of July, Nio said it has delivered 481 ES8s and had taken reservations for more than 17,000.