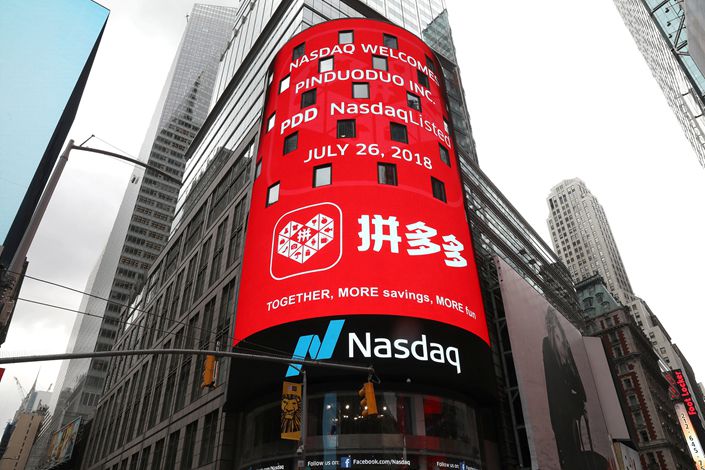 A message on a video screen in New York’s Times Square welcomes Pinduoduo to the Nasdaq Stock Market on July 26. Photo: VCG

Chinese discount e-commerce site Pinduoduo Inc. was hit by a sell-off less than one week after its strong debut on Nasdaq, reflecting investor concerns over allegations of selling counterfeit goods.

Shares of Shanghai-based Pinduoduo, which raised $1.63 billion in one of the biggest flotations by a Chinese enterprise this year, plunged more than 16% Wednesday morning to $18.68, falling below the offering price last Thursday of $19.

Pinduoduo’s American depositary receipts finished their first trading day at $26.70, up 40% from the listing price. But the strong debut was followed by consecutive drops. On Wednesday, the issue closed down over 10% at $20.31, leaving it with a market cap of $22.4 billion. ADRs are negotiable certificates issued by a bank that represent equity in a foreign company.

The Wednesday sell-off followed an announcement by China’s State Administration for Market Regulation that Pinduoduo is under investigation by market regulators in Shanghai for allegedly selling counterfeit goods.

Pinduoduo, backed by social media giant Tencent Holdings Ltd., is noted for its group-purchase model that encourages buyers of groceries, electronics and other goods to invite their friends to join together in qualifying for discounts. The social driven business model and aggressive discounts offered by Pinduoduo make it attractive to bargain-hunting customers, especially elderly people who have not previously engaged in e-commerce, analysts said.

The number of active buyers on Pinduoduo was 343.6 million by the end of June, surging from 295 million three months earlier, according to market researcher eMarketer.

But the company has come under closer scrutiny over allegations of fake products. Over the weekend, Skyworth Digital Holdings Ltd., one of China’s top TV makers, issued a statement on its official social media account demanding that Pinduoduo stop selling knockoff products carrying the Skyworth brand. The TV maker said it reserves the right to sue the site for selling phony products.

Pinduoduo said it is working on preventing vendors from selling fake products using its platform. On Tuesday, Pinduoduo said it has removed more than 10 million problematic goods from its platform and has required vendors to compensate buyers 10 times the price of a product if it is determined to be fake.

But it is still not difficult to spot knockoffs on Pinduoduo’s platform with names similar to those of well-known brands, such as a “Svmsung” television that resembles South Korea’s Samsung and a “Mr. Msevlce” cleaner that is easily confused with Mr. Muscle.

Company founder and Chairman Colin Huang said Pinduoduo will solve the counterfeit goods problem over time and called it an inevitable phase for a growing e-commerce site.