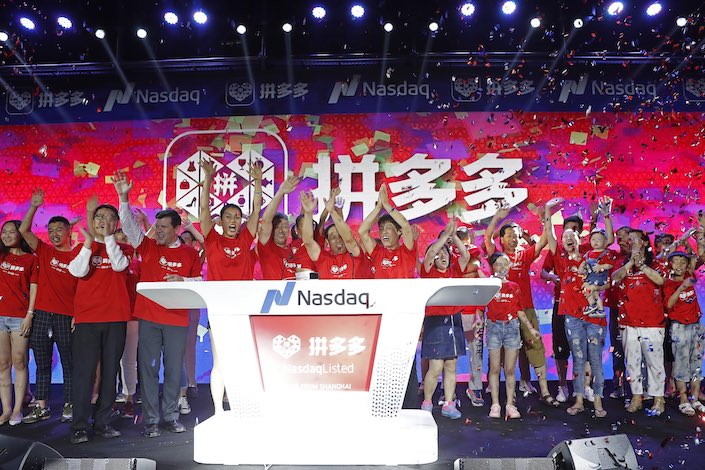 Chinese group-buying site Pinduoduo Inc. made a strong debut on the Nasdaq Stock Market on Thursday, following a $1.63 billion initial public offering that was one of the biggest flotations by a Chinese enterprise this year.

Traded under the ticker symbol “PDD,” Pinduoduo’s American depositary receipts (ADRs) opened at $26.50 each, nearly 40% higher than the offering price of $19. That put the company’s value at more than $29 billion.

The ADRs finished the first day of trading at $26.70. ADRs are negotiable certificates issued by a bank that represent shares of a foreign company.

Pinduoduo, backed by social media giant Tencent Holdings Ltd., is the latest to join a rush of sizable Chinese listings overseas this year. By the end of June, 26 Chinese tech companies sold $8.5 billion of new shares through IPOs, including many household names such as video sites iQiyi and Bilibili and online medical services platform Ping An Good Doctor, according to financial market information provider Dealogic.

But some of the issues have performed poorly since their debut. Both iQiyi and Bilibili dropped below their IPO prices on the first trading day. Online used-car dealer Uxin Ltd., which listed on the Nasdaq in late June, has largely traded below its IPO price of $9 a share.

Pinduoduo’s flotation has so far been warmly received. The company priced its IPO at top of the projected range and was oversubscribed twentyfold from investors that included Fidelity Investments and the sovereign funds of Abu Dhabi.

The oversubscription reflects investors’ confidence in the company’s business model and growth prospects, said Colin Huang, founder and chairman of Pinduoduo. The company’s rapid growth “proved the feasibility of its business model. We found a ‘new continent’ that still has great growth potential,” Huang said Thursday at a ceremony in Shanghai celebrating Pinduoduo’s New York listing.

Launched in 2015 by ex-Google engineer Huang, Pinduoduo uses a bulk-buying business model. It is noted for its “group purchase” system that encourages buyers of groceries, electronic devices and other goods to invite their friends to join in shopping to get discounts.

Pinduoduo’s Huang said that by making commerce social, Pinduoduo has been able to gather a large number of users quickly.

Pinduoduo allows shoppers to share the products they want to purchase on social media platforms such as Tencent’s WeChat and invite friends to join the transactions to gain a higher discount. Pinduoduo even offers cash-back incentives and free products to its most loyal customers to encourage social sharing.

Tencent is Pinduoduo’s second-largest shareholder with a 17% stake. The social media giant has offered the e-commerce company more access to the 1 billion users worldwide on its popular messaging and payment app WeChat.

This strategy has attracted bargain-lovers to flock to Pinduoduo to place orders. The number of active buyers on Pinduoduo was 343.6 million by the end of June, surging from 295 million three months earlier, according to an April report by market researcher eMarketer.

In 2017, shoppers placed 4.3 billion orders with 1.7 million merchants on Pinduoduo’s platform, with an average order cost of slightly less than 40 yuan ($5.90), according to the prospectus.

According to Huang, about 40% of the products offered on Pinduoduo are cheaper than those on Alibaba’s Taobao marketplace.

Huang said it won’t be difficult for Pinduoduo to turn profits as most of its costs are for marketing and advertising.

The company has also faced allegations that some products are fakes or substandard. Large e-commerce sites including Alibaba in recent years have stepped up efforts to force cheap and shoddy products off their platforms to focus on higher-end products as people’s incomes grow.

But Huang said that while China is in the process of upgrading consumption as consumers can afford more-expensive products, the demand for cheap goods is still huge. Pinduoduo has seen no sign of slower user growth of user, Huang said.

Huang said he expected Pinduoduo to become a combination of warehouse chain Costco and entertainment giant The Walt Disney Co. that can offer its customers good deals with entertaining experiences.