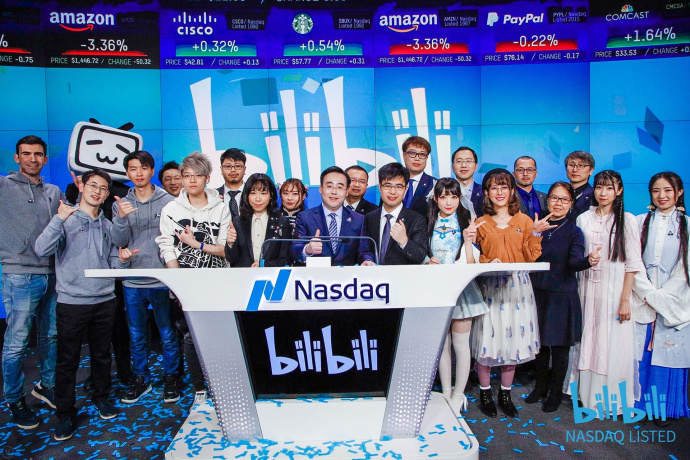 Bilibili is among a string of Chinese internet startups that have rushed to list in the U.S. recently. Photo: Bilibili

The Shanghai-based Bilibili opened on the Nasdaq Stock Market at $9.80 on Wednesday, below its $11.50 initial public offering (IPO) price. The company finished its first day trading at $11.24, following a dive to as low as $9.62.

It wasn’t the luckiest day to get rolling, as big-name tech stocks were hammered amid ongoing U.S.-China trade tensions and setbacks for Amazon and Facebook. The tech-heavy Nasdaq Composite index closed 0.85% lower on Wednesday.

Bilibili offered 42 million American Depositary Shares to raise $483 million in its IPO, which valued the company at $3.2 billion. The offering was underwritten by Morgan Stanley, Bank of America Merrill Lynch, and JPMorgan.

Bilibili filed the IPO in early March with the original plan to debut on the New York Stock Exchange. The company later changed the listing plan to the Nasdaq Global Select Market under the symbol "BILI."

Established in 2009, Bilibili is famous in China for its movies that let viewers comment in real time, with all comments streaming on screens of other viewers in a format known as “bullet chatting.”

In the prospectus, Bilibili defined its major user group as “Generation Z” — those born between 1990 and 2009 — accounting for about 82% of its users.

“We believe China will become the world's largest online entertainment market in the future, and our brand recognition and market leadership among the young generations in China position us well to capture the significant opportunities,” said Bilibili in its prospectus.

The company had 72 million monthly active users at the end of last year, up 45% from a year earlier. Each of those users spent an average of 76.3 minutes per day on the company’s mobile app, up from 72.2 minutes in 2016.

Primary revenue sources of Bilibili are mobile games, live broadcasting and online advertising. Its revenue jumped nearly fivefold in 2017 to 2.5 billion yuan ($394 million). About two-thirds of that came from mobile games, with advertising providing the next biggest single source at 15%. Its net loss last year totaled about 572 million yuan, about half the level from the previous year, according to its prospectus.

Bilibili is among a flurry of venture-backed Chinese startups that have rushed to list in the U.S. since last year. A total of 21 new listings by Chinese companies on U.S. exchanges were launched last year, the most since 2010, according to Bloomberg.

The next highly-watched debut will be iQiyi on Thursday. The video site, controlled by online search leader Baidu Inc., will raise over $2 billion through an IPO on Nasdaq.