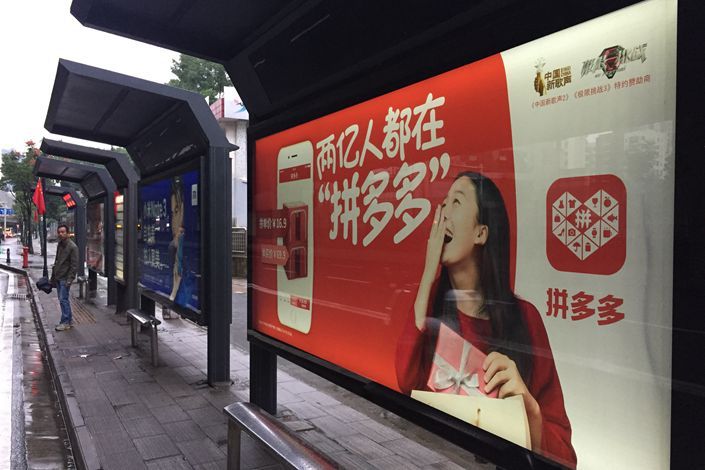 Chinese group-buying site Pinduoduo will price its U.S. initial public offering at $19 per American depositary receipt (ADR) to raise as much as $1.63 billion in one of the biggest flotations by a Chinese enterprise this year, a person close to the company told Caixin.

Pinduoduo, backed by social media giant Tencent Holding, priced the IPO at the top of a range between $16 and $19, according to its latest prospectus released July 17. The Pinduoduo flotation was oversubscribed by 20-fold from investors including Fidelity Investments and the sovereign funds of Abu Dhabi, the source said.

“The oversubscription would allow Pinduoduo to raise its IPO price by 20% to $22.80 per ADR, but the company founder Huang Zheng decided to price at $19,” the source said. ADRs are negotiable certificates issued by a bank that represent shares of a foreign company.

Launched in 2015 by ex-Google engineer Huang, Pinduoduo operates a bulk-buying business model similar to Groupon in the U.S. Huang, who is also chairman and CEO of Pinduoduo, holds 46.8% stake in the company, with 89.9% voting rights.

Pinduoduo said it would issue 85.6 million ADRs and will debut Thursday on the Nasdaq Stock Market. The company’s market cap would exceed $24 billion based on current pricing.

Three-year-old Pinduoduo is one of the fastest-growing companies in China’s thriving online shopping industry. It is noted for its “group purchase” model that encourages buyers of groceries, electronic devices and other goods to invite their friends to join in shopping to get discounts.

Bargain lovers flock to Pinduoduo to place orders, with an average order cost of slightly less than 40 yuan ($6), according to the prospectus.

The number of active buyers on Pinduoduo was 343.6 million by the end of June, surging from 295 million three months earlier, according to an April report by market researcher eMarketer. It is China’s third-largest e-commerce company in terms of sales, following Alibaba Group Holding Ltd. and JD.com Inc.

Pinduoduo’s fast rise has also faced allegations that some products are fakes or substandard, which worries some market observers over its reputation and financial sustainability.

In April, the company raised more than $3 billion from investors that included Banyan Partners Fund, Tencent, IDG and Sequoia China.