By Wei Yiyang and Coco Feng 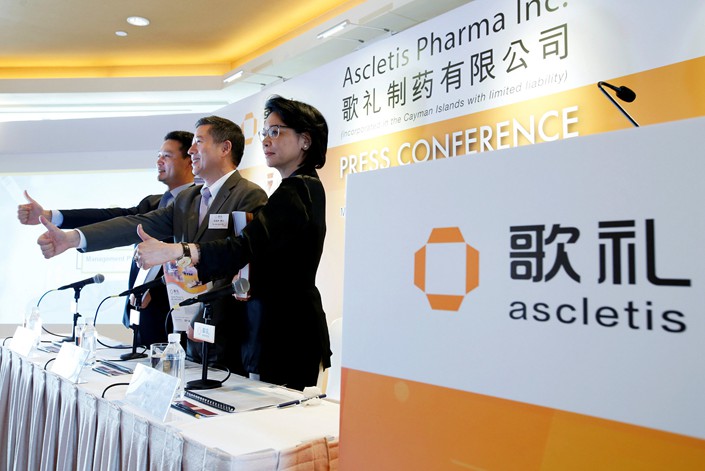 The IPO will continue until Wednesday, with the exception of Sunday. The company is set to start trading on the Hong Kong Stock Exchange on Aug. 1.

Hangzhou, Zhejiang province-based Ascletis, which specializes in developing anti-viral, cancer and fatty-liver-disease drugs, is the first preprofit biotech enterprise to go public in Hong Kong since the exchange lowered the listing threshold for such companies in late April.

Ascletis had been under pressure to list from a number of insiders who wanted to cash in on their ownership stakes, a person in the capital market told Caixin. Some shareholders believed the listing rule change created a window of opportunity for the company, so it decided to do the IPO now.

Ascletis applied for an IPO in Hong Kong in early May and updated the prospectus on July 10 after a listing hearing. The process took less than three months.

Following Ascletis, six other biotech startups have filed for an IPO with the Hong Kong bourse, including Hua Medicine and Innovent Biologics Inc.

The market’s acceptance of the Ascletis IPO’s pricing will become a reference point for other biotech firms that go public in Hong Kong in the near future, said an analyst from a foreign investment bank who tracks health care companies listed in Hong Kong.

In May, China approved the launch of a drug to combat hepatitis C developed by Ascletis, a significant milestone for the company as the medicine was the first direct acting anti-viral agent developed by a Chinese firm. But it faces fierce competition from U.S. biotech major Gilead Sciences Inc., which got the go-ahead for its hepatitis C drug in China around the same time.

Gilead said its drug can cure the disease within 12 weeks, while Ascletis’ drug can cure hepatitis C in the same period when used in combination of two other medications, demonstrating a 97% cure rate.

Sales of Gilead’s hepatitis C drug dropped 59% to $1.05 billion in the first quarter “as a result of increased competition,” the company said.

Ascletis founder Wu Jinzi said the low cure rate for hepatitis C in China gave the company a strong incentive to develop the drug to eliminate the disease. In addition to its hepatitis C medication, the company has another drug entering the final phase of its clinical trial, giving Ascletis a sufficient value pipeline to qualify for an IPO, Wu said.

Charles Li, chief executive of Hong Kong Exchanges and Clearing Ltd., reminded investors in a May post of the potential risks if they don’t understand the biotech industry, which “has unique characteristics and a much higher degree of risk.”

There are 113 biotech companies listed on New York’s Nasdaq Stock Market, only 13 of which have a valuation of more than $3 billion. But Fosun-backed Henlius Biotech, which has not yet gone public, is already valued at nearly $3 billion based on its latest funding round.

Chinese biotech firms are usually moderately valued on U.S. bourses because investors have become cautious due to a number of financial fraud scandals involving Chinese companies. These biotech companies may garner a higher value in Hong Kong given investors there have a better knowledge of the Chinese mainland market, the health care company analyst told Caixin.

Wang Luyao contributed to this report.