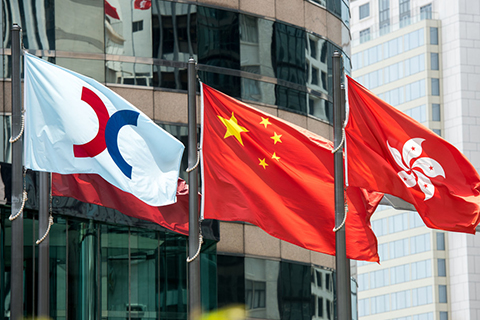 Hong Kong announced widely expected rule changes allowing companies with a dual-class share structure to list on its bourse. The changes are intended to position the Hong Kong exchange to compete for large tech listings.

“After a remarkable four-year journey of careful deliberation, HKEX’s new listing regime is finally open for business,” said HKEX Chief Executive Charles Li. “We are now at the dawn of an exciting new era for Hong Kong’s capital markets.”

As part of the reforms, HKEX also amended its rules to allow the listing of pre-profit biotech companies starting Monday.

The new rules require that biotech issuers must have at least one “sophisticated investor” with a “meaningful investment” for at least six months before an IPO.

The exchange said it would provide more guidance on what is considered a "sophisticated investor” and a "meaningful investment” in relation to biotech issuers.

Li said more than 10 companies are interested in submitting IPO applications under the new rules, of which most are biotech companies. There are also several bigger companies with controversial dual-class structures that are potential applicants, he said. The first listings are expected to be completed by the summer and more in the fall, he said.

China’s largest smartphone maker, Xiaomi Inc., is preparing for an IPO. Sources said Xiaomi wants to become the first company with a non-traditional share structure to list in Hong Kong.

The long-awaited overhaul of Hong Kong’s listing rules comes in the wake of years of debate and the loss of technology giant Alibaba Group’s listing to the U.S. in 2014.

Alibaba originally sought to float shares in Hong Kong. However, it chose New York for its record $25 billion IPO after Hong Kong refused to accept its governance structure, which conflicted with Hong Kong’s “one share, one vote” principle.

Some of the world’s largest and most influential tech companies, from Facebook Inc. to Google parent Alphabet Corp., use dual-class share structures to maintain the influence of the founders and management after they go public.

Hong Kong has been vigorously attempting to compete with other global exchanges for lucrative tech listing by making its rules friendlier to companies in innovative sectors. But it faces stiff competition while Beijing also steps up its efforts to attract Chinese tech companies to list at home.

The China Securities Regulatory Commission (CSRC) is working closely with the Shanghai Stock Exchange to map out guidelines for issuing Chinese depository receipts (CDRs) — which are tradable certificates representing foreign equity — in the next one to two months, a source close to the regulator told Caixin.

Li said he did not see China’s CDR plan as a threat to the Hong Kong exchange, but rather as an opportunity. That’s because as China’s A-share market expands and opens up on an international level, there will be overflow effects that would benefit Hong Kong, he said.