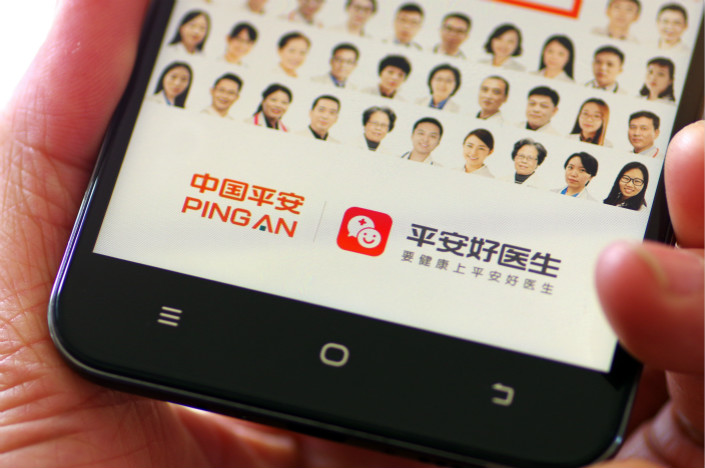 Ping An Healthcare and Technology, widely known as Ping An Good Doctor, is offering about 160 million shares in its upcoming IPO. Photo: VCG

A health care unit of Ping An Insurance Group, China’s second-largest life in-surer by premiums, plans to raise as much as HK$8.77 billion ($1.13 billion) in its Hong Kong listing scheduled for next Friday.

Ping An Healthcare and Technology Co. Ltd., widely known as Ping An Good Doctor, is offering about 160 million shares priced between HK$50.80 and HK$54.80 each, the company said.

Retail investors will be offered 6.5% of the allocated shares, with the rest targeted at international institutional investors, it said.

Caixin reported in January that Good Doctor planned to raise around HK$7.8 billion, and a source said potential investors had been reserved for the initial public offering (IPO) amid the company’s unprofitability.

However, its floatation in Hong Kong appears to have attracted strong interest from global investors. All seven cornerstone investors — including BlackRock Inc., Singapore sovereign fund GIC, and the Canada Pension Plan Investment Board — have subscribed to around half of the shares allocated for institutional investors, according to its initial public offering prospectus.

In February, Japanese tech giant SoftBank’s Vision Fund was among the investors in the $400 million pre-IPO round for Good Doctor.

Good Doctor offers on-demand services such as connecting patients with doctors for consultations and diagnoses, allowing them to make outpatient appointments or get rehabilitation advice. It also boasts an online health mall that sells medications and medical equipment.

Good Doctor said it aims to tap China’s rising demand for quality health care services, as “the lack of quality primary care and the scarcity and uneven distribution of quality medical resources” have plagued the country for many years.