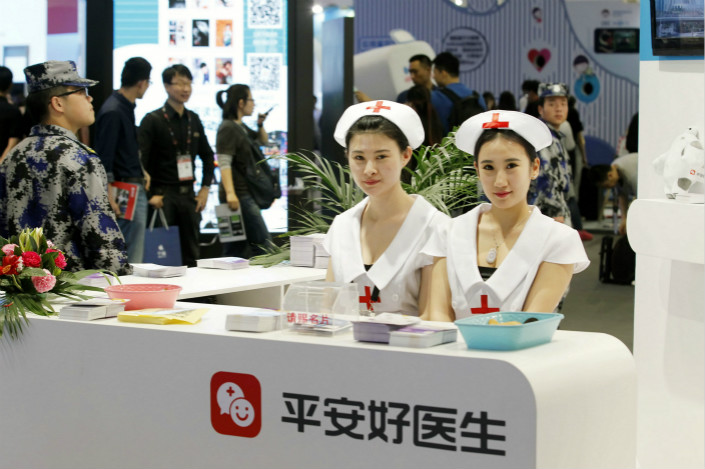 The Hong Kong Stock Exchange has OK’d a separate listing of Ping An Healthcare and Technology, a subsidiary of Chinese insurance behemoth Ping An Insurance Group. Photo: VCG

Ping An Healthcare and Technology Co. Ltd. looks set to be the first of four affiliates of Ping An Insurance Group to be spun off from the insurance giant this year.

The Hong Kong Stock Exchange has given the go-ahead for the separate listing, Ping An Insurance said on Monday. A 520-page application proof of the initial public offering (IPO) prospectus was made available on Tuesday, although many details, including the timetable, the number of shares to be issued, the price and the market capitalization were redacted.

Softbank Group, a Japanese telecom and technology conglomerate, paid $400 million for a 7.41% stake in the company in December through its Vision Fund private equity fund. The investment values the business at $5.4 billion, according to Caixin calculations.

Ping An Healthcare runs an internet health care platform that offers online medical and wellness services such as family doctor services, consumer health care services, a health mall, and health management and wellness services. The number of monthly active users has reached 20 million, and the highest number of daily online consultations in December reached over 800,000, according to the IPO application proof.

The source told Caixin that the initial plan was to raise HK$7.8 billion ($1 billion), though the final amount remains under discussion. Potential investors have mixed views about the health care business because of its “less than eye-catching” performance, the source said.

Heavy dependence on sales to other companies within the Ping An group is also a concern to potential investors. The IPO document says the company has a limited number of key suppliers and customers, and notes that the top-five customers are all subsidiaries or “close associate(s)” of the parent company.

Ping An Insurance will remain the controlling shareholder of Ping An Healthcare after the listing.

Ping An Healthcare said it plans to use around 40% of the IPO proceeds for business expansion, 30% for investment and partnerships, 20% for research and development, and the remainder for general corporate purposes.