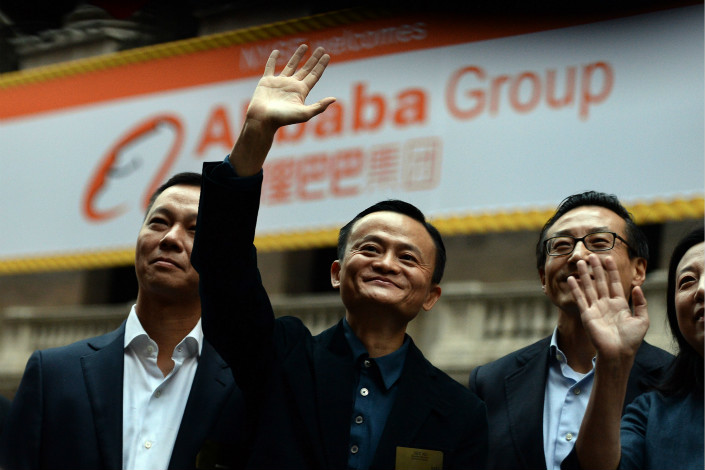 China’s securities regulator is preparing for the launch of Chinese depository receipts (CDRs), which would allow overseas-listed companies like Alibaba, whose CEO is Jack Ma (pictured), to be traded on domestic exchanges. Photo: VCG

China’s securities regulator could announce guidelines for issuing Chinese depository receipts (CDRs) in the next one to two months, aiming to make shares of e-commerce giants Alibaba and JD.com available to domestic shareholders for the first time ever as early as June, sources told Caixin.

The China Securities Regulatory Commission (CSRC) is now working closely with the Shanghai Stock Exchange to map out the guidelines as soon as possible, a source close to the regulator told Caixin.

Regulators are looking to model CDRs after U.S.-listed American depositary receipts (ADRs). The CDRs would enable overseas-listed Chinese companies to make secondary offerings on China’s A-share market — something that currently isn’t allowed. That obstacle has kept shares of some of China’s largest companies, such as Alibaba Group Holding Ltd. and Baidu Inc., beyond the reach of most domestic stock buyers, since most such firms are listed in New York and Hong Kong.

“The sense of urgency now is to formulate rules regarding the issuance, then the authorities will look into relevant issues such as re-financing, mergers and acquisitions to fine-tune the whole CDR system,” the source told Caixin.

Analysts have said the new guidelines have to address issues such as foreign exchange management, accounting rules, disclosure requirements and pricing systems.

U.S-listed Alibaba and JD.com Inc. are expected to become the first companies to make secondary listings on the mainland market through CDRs, other sources previously told Caixin. These companies and their sponsors have been preparing materials for the listings pending the CSRC’s release of detailed guidelines, those sources said.

Baidu could also be one of the first issuers, after officials from the regulator paid a few visits to CEO Robin Li, including their latest trip in mid-March, people with the knowledge of the matter told Caixin. Baidu’s recent warming to the program represents a change for China’s leading search engine, whose top management reportedly gave a lukewarm response when approached by the commission late last year.