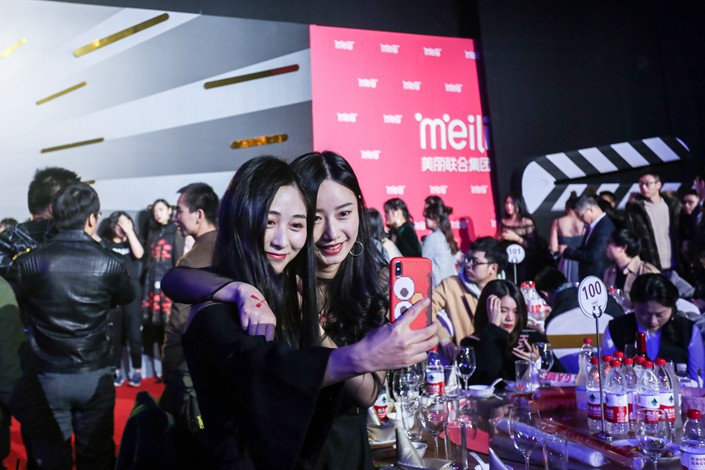 A selfie gets shot at Meili’s annual meeting on Feb. 3 in the eastern city of Hangzhou. Photo: IC

The company, which was formed through the merger of two popular e-commerce sites in 2016, made the filings to the U.S. securities regulator late last week, said the source, speaking on condition of anonymity because the information is still private.

The listing would mark the latest by a major Chinese e-commerce company, and would come around the same time that another Tencent-backed online operator, group buying site Pinduoduo Inc., filed for its own U.S. listing to raise up to $1.87 billion. The listing is also part of a broader wave of high-tech IPOs by Chinese startups in New York and Hong Kong, all seizing on a window of positive investor sentiment dating back to the end of last year.

A Meili spokesperson had no comment on the company’s IPO plans. Meili was formed through the 2016 merger of Mogu Street and Meilishuo.com, which were founded in 2009 and 2011, respectively, at the height of China’s e-commerce boom. Since then, the industry has consolidated around two major players, Alibaba Group Holding Ltd. and JD.com Inc., the latter of which also counts Tencent as a major shareholder.

Meili’s two major websites both started out as lifestyle channels on social media that introduced users to products sold on Alibaba’s e-commerce platforms. But they terminated that relationship after a dispute in 2013, and since have become e-commerce companies in their own right.

Tencent first invested in Meilishuo.com in 2012, and now owns about 15% of the combined company, following a similar pattern for buying similar-sized minority stakes in its strategic partners like JD.com. A number of other Tencent-backed companies have made similar IPOs over the past year, including a HK$8.3 billion ($1.1 billion) listing for its web-based China Literature unit in November, and an upcoming plan to list its music unit.