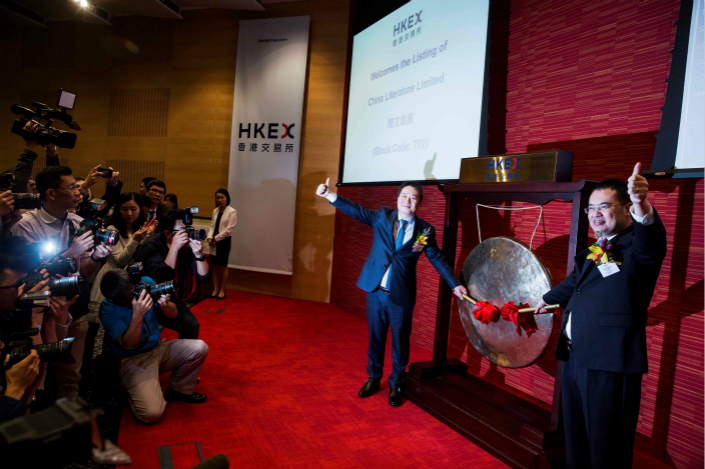 The online publisher saw its shares hit a peak HK$110 ($14.10) within an hour after opening at HK$90, trading substantially higher than their initial public offering (IPO) price of HK$55. At midday, China Literature shares pared some of their earlier gains and stood at HK$104.30.

It owns the intellectual property for some of China’s most popular online serial novels, like fantasy series “Grave Robbers’ Chronicles” and the romance “To Our Youth That Is Fading Away,” which have been turned into a TV series and film respectively.

China Literature said Tuesday it had raised HK$8.33 billion from an initial offering of 151.37 million shares, valuing the company at HK$49.85 billion. Both retail and institutional tranches were heavily oversubscribed, with the portion available to individual investors was oversubscribed by 625 times, the company said.

The massive oversubscription led to a brief tightening of market liquidity on Oct. 31, the day China Literature priced its IPO, with the overnight Hong Kong Interbank Offered Rate jumping to a nine-year high of 2.679%.

The company hopes to turn more of the literature it owns into a range of products, including videos, animations, and games, China Literature co-CEO Wu Wenhui told reporters at Wednesday’s listing ceremony.

“Today’s share price performance reflects on one hand everyone’s confidence in China’s cultural industry as a whole, but also reflects their confidence in China Literature,” Wu said. “This is a very pleasant surprise, but is also putting a lot more pressure on us.”

Investors are probably buying China Literature stock “on its future growth potential and scarcity of species rather than its valuation, which currently stands at over 1,800 times the price-to-earnings ratio,” Margaret Yang, a market analyst at derivatives dealer CMC Markets, told Caixin.

Over the next few days, “some consolidation” of the company’s shares is possible, as unlike companies listed on the Chinese mainland, Hong Kong-listed shares don’t face daily price limits, and “first-day trading might have priced in most of (investor) expectations,” Yang added.

China Literature’s debut was preceded by a smaller listing on the Shanghai Stock Exchange by fellow e-book platform IReader Technology, on Sept. 21. IReader saw its shares rise to the daily limit for over three weeks, climbing more than 500% in its first month of trading.

But IReader warned in late October that the developing online reading sector still faces some uncertainty, saying that brokerage reports may have overestimated its earning potential.